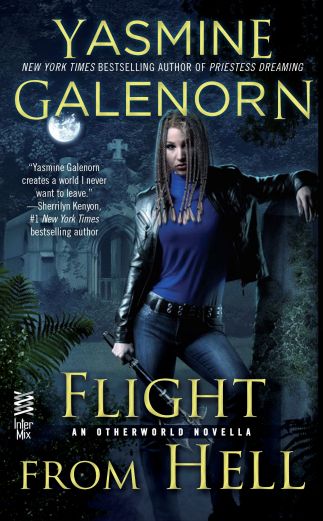 Part of the Fly By Night Permanent Hiatus series:

Flight From Hell, a novella by Yasmine Galenorn

When Carter, half demon, comes to Menolly and her sisters, asking for their help, they think he's just had a tiff with Shimmer, his blue dragon girlfriend.

But after talking to Alex Radcliffe, the owner of the Fly By Night Magical Investigations Agency where Shimmer works, they suspect that she has been kidnapped by an old enemy of Alex's.

Now, Alex joins forces with the D'Artigo sisters in a desperate race to find Shimmer before Julian, a powerful vampire from Alex's past with a grudge to settle, can use the dragon to wreak havoc on Seattle as revenge.

Note: Flight From Hell is a crossover novella with the Otherworld Series, designed to introduce Alex and Shimmer.