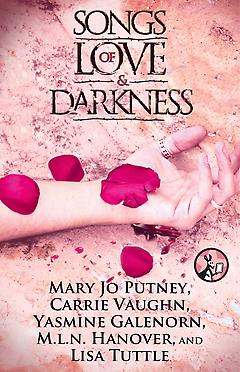 Part of the Novellas/Collections series:

Songs of Love and Darkness
by Pocket Star

Featuring stories by Mary Jo Putney, Carrie Vaughn, Yasmine Galenorn, M.L.N. Hanover, and Lisa Tuttle these contemporary tales of ill-fated love, originally published in the anthology Songs of Love and Death (edited by George R.R. Martin and Gardner Dozois) explore romance in five wildly creative settings - from the hidden supernatural side of New York City to werewolf-occupied West Texas. These stories promise to keep you up all night.

Yasmine's Contribution: Man in the Mirror.

Harder even than trying to live in two worlds is being trapped between them, like a bug between sheets of glass . . .Galen, trapped in spirit, between the worlds, meets Laurel--the love of his life, whose death might just be his ticket to freedom.

Songs of Love and Darkness