The Green Faerie is a scene that takes place between Crystal Web and the upcoming Witch’s Web. 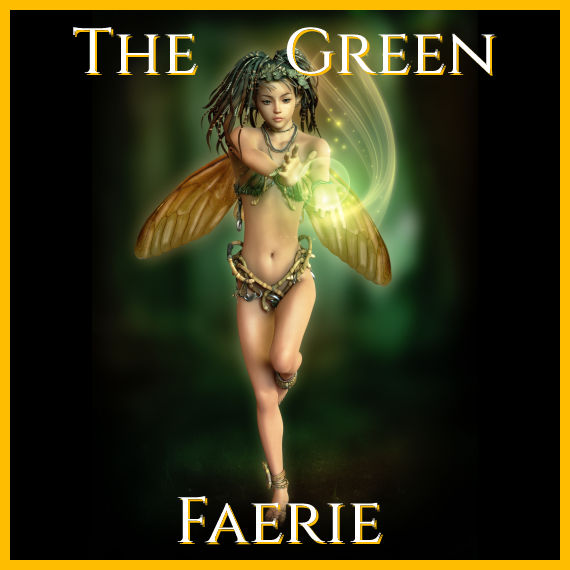 Teran stared at the green bottle of absinthe sitting on the counter. She let out a slow breath as she waited. She’d whispered the incantation, had sacrificed the crystal by grinding it to powder and sprinkling it at the base of the mandrake root, and now she was waiting for a sign. After half an hour, she decided that the spell was going to take more time than she wanted to wait around for, so she headed to her kitchen to grab a handful of chocolate chip cookies.

She was two cookies into the stack when a loud noise alerted her. Slowly, she placed the cookies on the counter and then jogged toward the greenhouse, which was affixed to the side of her house.

“I hope the neighbor cat didn’t get into the greenhouse,” she said to Prue as she hurried along.

Don’t worry, you never let them have a chance, Prue said. They know better and they trust you when you tell them its dangerous in there for them.

Prue was her Lady—her aunt who had come knocking on her spiritual door with the white rose when Teran was twenty-five. That had been almost half a century ago, and Prue had never let her down yet. Sometimes, Teran wondered what it would have been like to not live in a family where the matriarchy ruled and where her female ancestors guarded over the living, but the thought made her shudder and she pushed it out of her mind.

As Teran entered the greenhouse, she glanced around, looking for any intruder. But her wards were strong and there were no invaders, be they from the astral plane or from her neighborhood. However, she did notice that the crystal dust on the soil surrounding the mandrake had vanished, and that the bottle of absinthe had divested itself of its cork—all on its own. The cork was on the floor, near one of the windows.

Bingo, she thought. The spell took. Now to find her.

Teran cautiously walked over to the bottle. When dealing with imps, one always had to be careful. The Green Faerie was well known in magical circles, though she wasn’t a true faerie. She wasn’t even a true imp. She was a spirit of the absinthe, which—for the purposes of Teran’s earth magic—also translated into an oracle. And right now, Teran was looking for help.

A laugh echoed from one of the dwarf lemon trees growing on the far side of the greenhouse. Teran started toward it. For years she had worked on her greenhouse, slowly adding on to it each time she managed to get a chunk of spare change. Finally, when one of her CDs matured, she took the money and finished the final enlargement.

Now the greenhouse was spacious, almost half the size of her cottage, and since it was fully heated and protected from the elements, Teran had added a rocking chair, and a small table in the corner, so she could relax in the greenhouse and spend time with her plants. Witchblood who worked with the earth element tended to feel strongest when they were surrounded by greenery.

Teran slowly approached the lemon tree. The laughter grew louder, not maniacal but with a wild and free tone.

“Who’s there?” she said. She wasn’t at all sure that anyone would reply, but after a moment a sultry voice echoed from behind the tree trunk.

“You know who I am. You summoned me.”

“The Green Faerie? Is it really you?” Teran tried to get a glimpse of her but in the dim light, all she could see was a swirl of sparkles. Green and purple, with a hint of gold thrown in. They were mesmerizing, glittering like gems in the night.

There was a pause, and then, as if in slow motion, the Green Faerie appeared, stepping out from behind the tree trunk. She was as beautiful as Teran had imagined. The faerie had long black hair that sparkled with glints of light, as though it had been streaked with purple glitter. Golden skin, with almond shaped eyes that were the most lustrous green Teran had ever seen, the creature was beautiful. Her wings were long and nebulous, as if made of smoke. A gossamer dress woven of spiderwebs trailed over her body, making her look more nude than if she had been wearing nothing.

“You summoned me. What do you want?” The faerie sauntered over toward Teran, stopping at the edge of the planter. Effortlessly, she spiraled into the air and glided over to sit beside Teran on the table.

Teran lowered herself into the rocking chair, doing nothing that might startle the Green Faerie and chase her off. “I have a boon to ask you. A favor for my niece.”

“What do you need?” The Green Faerie Looked bored. “I’m not a djinn, you know. I don’t hand out wishes like candy to every witch who summons me.”

It wasn’t exactly the reaction Teran had hoped for, but she had been prepared for it. Working with the elementals and nature spirits was difficult enough. But working with a spirit from the realm of alcohol was another matter.

Teran had once met the spirit of tequila, and—after waking up from a twenty hour hallucination fest—she swore she never wanted to deal with any of them again. But the Green Faerie could help January kickstart her work with herbs and spices. She could help her touch the very core of the element of Earth. Oh, January was already pledged to Druantia, a goddess of the earth. But that didn’t mean that she had truly touched the core of earth magic itself.

“I have a niece,” Teran said. “She’s an earth witch come late to her element. I’d like to help her strengthen her connection with the earth, and the energy of the earth magic. I know that you can do that. I was wondering if you would be willing to help me.”

“I can do that,” the Green Faerie said. “But give me a good reason why I should, and remember, I’m not an altruistic soul.” She sat, leaning back flat on the soil in the planter as she rested her arms under her head.

Teran thought it odd that the faerie wasn’t afraid of her. After all, she was far larger, and she was a fairly powerful witch.

“I’m sorry—” Teran started to say but the Green Faerie cut her off.

“Don’t ever make the mistake of thinking you’re more powerful than I am, because I can destroy you. I could destroy your mind if I wanted to. I’ve done it before, and I’ll do it again.”

The faerie’s words hit Teran to the core. She could feel the energy drifting off the creature, and now it hit her full force. She caught a glimpse of just how destructive the Green Faerie could be and it shook her bone-deep.

“I apologize. I was just surprised that…” Teran was well spoken, but she had no clue how to get out of this one. After a moment, she sighed and shrugged. “All I can say is I’m sorry. I meant nothing by it.”

“Why didn’t you niece start learning her magic from a young age?” the creature asked.

“Because her mother was stupid. I loved my sister, but she was hesitant about her own abilities, and so she placed her daughter in a precarious situation. January’s lucky that she didn’t implode from a buildup of residue power. That can happen to witchblood. January did try her best to teach herself, but her ex was a human who…was basically a giant cockroach. Now, she’s trying to make up for lost time. She’s needs to learn the basics as quickly as she can.”

There was a surge that all witches went through near their 50s, and it was accompanied by a great increase in power. If unprepared, it could scramble the brains or short out their natural instincts. So, the more prepared they were, the better they weathered the storm.

“You really do need help.” The faerie stood, dusting off the back of her gossamer dress. “And you know that my way is not gentle? What I can do isn’t a pat on the back.”

“I know, and I’ll warn her first. But we don’t have time for methods that can reprogram her mindset. My instinct is urging me to help her through this now. I don’t know why, but it feels important. So, will you help me?”

“I suppose. But in repayment, I want a year of your life. One year. No more, no less.” The faerie gave Teran a long look, waiting for an answer.

Teran hung her head. She had done enough research to know what the Green Faerie was capable of, and that she would ask a huge payment in return. But Teran also knew she had already beaten the odds. The women in her family died young thanks to a curse, and Teran had lived longer than she had expected to. She wasn’t looking forward to dying, but there was some comfort in knowing that at least, when she did go, she would’ve helped her niece in a way that few others except those of witchblood could.

“All right. I agree.” Teran held out her hand and the faerie pressed her own fingers against Teran’s palm.

“The deal is done. I will create the elixir for you. And the ritual to go with it. It’s not my fault if you use it incorrectly, but if you follow instructions, it should work its magic and work it well. Come back in three nights time and I’ll have it for you.” The Green Faerie shooed her away.

As Teran walked toward the door her only thought was how she was going to explain this to January. She pushed open the greenhouse door, and stared out into the windy night. The breeze swelled around her, and Teran had a premonition that something was on the way. Something that would connect itself to the ritual of the Green Faerie. What it was, Teran couldn’t tell. All she did know is that she had just unleashed Pandora’s box, and what was in it, would only be revealed in time.