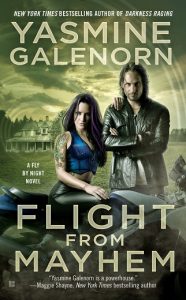 An excerpt from FLIGHT FROM MAYHEM for you!

We finished eating in silence, with Tonya yawning her way through the meal. I glanced at the clock. Four a.m.

“Why don’t you finish eating and then go to bed? The way you’re yawning, I’m afraid you’re going to keel over in your plate.”

“Actually, I feel like I could, except that I’m also still hyper from the trip and my mind is whirling. Why don’t you show me your haunted house and then I’ll go to bed after that? You’re still awake, right?”

I nodded. “Given my bedtime is around two o’clock and I wake up at six or seven, yeah, I’m up for a while.” I dug out a flashlight and strapped my dagger to my thigh, and, with Chai in tow, we headed across the street.

As we approached, Mary’s house seemed so silent that my stomach lurched— too silent. Unnaturally silent. But the moment we stepped into the yard, the energy rose, whirling around us. The willow was restless— I could sense its wariness. A rustling through the undergrowth startled me, but when I closed my eyes, reaching out, I knew that neither human nor animal was responsible for the noise.

Tonya’s tears had vanished, and she looked wide awake and alert. She glanced around the yard, pausing just past the gate. “There is so much going on here. I’ve never been in the Greenbelt Park District before, though it has a reputation with all the witches and psychics in the area. But the activity is amazing.” She turned to the swing and gasped. “There’s a child’s ghost here— on the swing.”

Chai and I both turned to look. I could see a wispy outline. Beside me, Chai stiffened. I had the feeling that, regardless of whether he could see the same thing I was, he knew something was there.

Another moment and he let out a long breath. “How young?”

I frowned. The image felt heavy, would be the best way I could describe it. Dark with an outline of light. And the sadness went so deep that it threatened to swallow me up. There was something behind the sadness, though. Beneath the surface . . . close eyes, tune in, listen . . . A hunter. I jerked back as it flared, angry and hurt— like a wounded animal. As I jerked around, Tonya started forward. Her brown eyes were glassy, pools of coffee.

But Chai was faster. He had hold of her arm, dragging her back from the swirl of mist. It rose up like a snake, let out a long hiss, and then vanished. Tonya blinked.

“What . . . crap!” She shook her head. “That thing got past my wards, and I thought they were pretty damned strong. What the hell?”

“Don’t feel too bad. The Greenbelt Park District is a nestof strong spirits. More powerful people than you have been taken down here. I’ve heard some pretty frightening stories, and Alex has a few of his own.” I motioned toward the porch. “Let’s go find Mary. I hope that wasn’t her.”

Tonya raised her eyebrows, grinning. “If it was, I’d say we’re in for a hell of a ride.” She swung around me and resolutely marched up the stairs. Shapely, she was fit but curvy. Tonya was wearing jeans and a pale blue tank top beneath a denim jacket. Her dark blond hair was braided back into the French braid she’d been wearing the first time I met her. But what really set her apart was her energy.