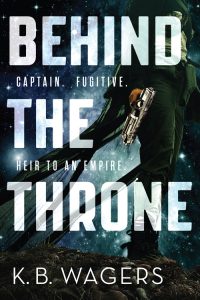 Q: What do you love most about what you write?

K.B.: I love writing worlds that are “out there” with just enough of the familiar to keep readers grounded. Since the world my current novels are set in is far in the future, I like playing with words and how languages evolve (or what words might stand the test of time).

Q: Tell me the name of one of your characters, and what you loved and struggled with most while writing them?

K.B.: The Indranan War series is all first person POV, so technically everything is written through Hail’s eyes. While I do love her to death, I think in many ways her BodyGuard Emmory is the character I love the most in the story. I loved being able to show his loyalty and beliefs through Hail’s eyes—super challenging when she doesn’t trust him at first. I did struggle with it a bit because he’s not the most forthcoming character. *laughs*

Q: What’s the oddest thing you’ve ever received from a fan or bought for your writing?

K.B.: Since I’m a debut author I haven’t really started getting things from fans as of yet. As far as something I bought for myself that might be strange, I was just talking about how I’d started kung fu lessons as a research project and ended up doing eight years and earning two black belts because of it. So I’d have to say that’s probably the oddest thing to date!

Q: What do you want your readers to take away from your books?

K.B.: Hail’s books are, above all, about family. The one you’re born with and the one you can make and the bonds that develop between people through time and circumstances. There’s a lot of love in my books, but an absence of any romantic love for Hail herself for a number of reasons. I wanted to look at the idea of love from a devotion/comrade standpoint rather than anything romantic.

Q: Who is your favorite movie heroine and why?

K.B.: I’m still riding the Furiosa train. *laughs* I was just blown away by that film. Everything about it from the plot to the dialog to the way it was composed and cut is just breathtaking to me. Even though BEHIND THE THRONE was completed before the movie came out, I see a lot of her in Hail. Furiosa is just trying to do something right after a lifetime of living in this oppressive hell. She doesn’t want to be a hero or a leader but that’s the way things work out.

Q: What do you have coming out next, or what just came out?

K.B.: So BEHIND THE THRONE just came out. The second book in the series: AFTER THE CROWN will be out in December and the third book comes out in 2017. I’m not sure yet if we’ll have any more Hail books after that but we’ll see.

Q: Will you have espresso, mocha, cappuccino, latte, coffee, tea, or some other concoction?

K.B.: I’ve been drinking a lot of iced black coffee lately, so that would be lovely. Thanks!

BUY LINKS FOR BEHIND THE THRONE:

K.B. Wagers lives and runs in the shadow of Pikes Peak. She loves flipping tires and lifting heavy things. She’s especially proud of her second-degree black belt in Shaolin Kung Fu and her three Tough Mudder completions. When not writing she can be found wrangling cats with her husband, or trying to keep up with her teenage son.