Today: LEGEND OF THE JADE DRAGON (Book #2 of the Chintz ‘n China Series) 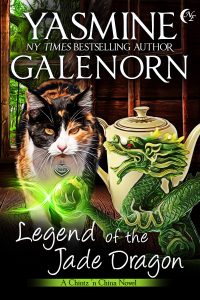 I passed an abandoned corner grocery store and then one of Chiqetaw’s many moldering houses, shivering as I glanced up at the old Victorian. I’d nearly lost my life in Eunice Addison’s white elephant last December; it had looked remarkably similar to this one. Give me a new house any day, tidy and neat and compact.

A low hooting startled me; an owl in the tree I’d just passed was waking for the night. I stopped, gazing up at it as it eyed me silently. While some cultures considered the owl a bad omen, others thought it wise and magical. I preferred the latter version. “Are you telling me something?” I whispered. The bird slowly closed its eyes, then opened them again. Observant. The owl watched everything, looking for the smallest signs of scurrying rats and mice. Maybe that’s what it was trying to tell me—to keep my eyes open, to pay attention.

Which brought to mind White Deer’s advice. If I was honest with myself, I knew she was right; I’d shut off my inner senses, blocking my intuition, and I wasn’t sure why. Maybe Daniel’s death frightened me from looking too closely at the future. Maybe I felt some misplaced guilt that I had contributed to his death. One way or another, I’d flipped the switch to dim, except for when the dragon had hurtled me into the midst of its visions. I had enough experience to know that psychic power could be dangerous when repressed. Time to open the floodgates.

Eight blocks from home, I tentatively reached out, listening with what I dubbed my “astral radio.” After a moment, during which the night felt so ethereally silent that the very brush of air on my skin spooked me, I began to sense turmoil; there was an argument going on somewhere on the other side of the street, behind the closed curtains and locked doors of a house. A few houses later, a wave of intense grief washed over me, and tears sprang to my eyes, threatening to crystallize and spill over. Someone was mourning the loss of a loved one.

Six blocks from home, as I passed what was obviously a teenage hangout; waves of party-hearty energy assailed me. Music was blaring from inside. Somebody was stuck in the eighties, I thought, watching as the spinning lights from a disco ball flashed through the window. A vortex of laughter and sexual energy flooded my mind, and I was suddenly aroused, flushing as I quickly broke contact. The party had enough booze and funny cigarettes making the rounds to light up Chiqetaw. Enough for one night. I was ready for TV and a bowl of soup.