Today: A HARVEST OF BONES (Book #4 of the Chintz ‘n China Series) 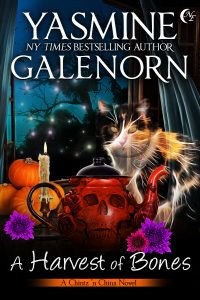 I nodded, “I picked up something from the cloth—psychometry. Nothing specific, just a feeling of loss and death.”

Jimbo wrangled a flashlight out of his jacket and entered the room, starting the hunt for Samantha. “O’Brien, sometimes you scare the piss out of me. Let’s find your cat and get out of here. I think it’s time to blow the joint.”

Despite my nervousness, I laughed. “Babe, you are a breath of fresh air. But save the dynamite. I had quite enough of your lovely explosions, and I’m not helping you blow up any more of my china. Don’t worry, we’ll make it home in one piece, Will o’ the Wisps or not.”

We began searching for Sammy, calling for her. I thought I heard a cry under the bed but when Jimbo got down on his knees to look, there was no one there. I was poking around near the nightstand when I noticed a framed picture on the wooden table. A lovely young woman stared at me, frozen on film in a single moment of time. She was willowy, with long red curls, and she held a tortoiseshell who looked a lot like our Sammy. A dreamy, lost look filled the woman’s eyes, and as I stared at the photo, I recognized her. I’d seen her the night before—outside Randa’s room.

Goose bumps rose along my skin. Whoever she was, she’d been visiting in my house. I tucked the picture in my pocket.

“Look at this!” Joe held up a faded journal. The pages were damp, but most of the writing was still readable. He held the flashlight steady while I examined the diary. The front flap identified the owner as “Brigit.” As I gingerly accepted it, the same flow of energy tingled through my fingers that I’d felt from the picture and the cloth. Brigit.

My red-haired ghost had been a woman named Brigit who had been staying with the Brunswick family. Whether she was a relative or a friend, I couldn’t tell. I slid the journal in my pocket next to the photograph.

Jimbo hauled a suitcase out from the closet, along with a few dilapidated dresses. Functional but not pretty. “Tag on the luggage says that this belonged to Brigit O’Reilly. Looks like she came from a place called Glengarriff, Ireland.”

I decided to wait before telling them that Brigit was my ghost from last night. After all, she hadn’t been antagonistic, and I wanted to get a better feel for what we’d discovered before I threw another iron in the fire.

“I don’t see Samantha anywhere,” I said as we made a last sweep around the room. “Do you?”

Both Jimbo and Joe shook their heads. As we took one last look around the perimeter of the room, Joe flashed his light over the back wall. I gasped. It was covered with murals; the paintings had faded but were still in relatively good condition.