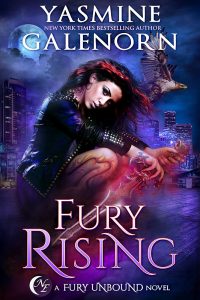 “My name is Kaeleen Donovan. I’m a Theosian-a minor goddess. They call me Fury.”

By day, I run the Crossroads Cleaning Company, and I also read fortunes and cast hexes at Dream Wardens, a magical consulting shop. But by night, I’m oath-bound to Hecate, goddess of the Crossroads. Hecate charged me from birth with the task of hunting down Abominations who come in off the World Tree and sending them back to Pandoriam.

When the Thunderstrike-an ancient artifact from the time of the Weather Wars-is stolen by the Order of the Black Mist, Hecate orders me to find the magical device. The chaos magicians are out to upset the balance that Gaia instilled during the World Shift. But I soon discover that the leader of the Black Mist is out to do more than stir up trouble-he’s looking to set up a new world order with himself on the throne. Caught between two rival forces, will my friends and I be able to survive as we search for the Thunderstrike and attempt to stop a war that could bring about the end of the civilization?

Bog-dogs were deadly. They had teeth sharp enough to rip flesh to shreds, and a temper to match. They were hard to train and harder still to domesticate. The government had originally bred them specifically for the Devani to use, but some had gotten loose in the Bogs and had bred into feral and deadly predators.

“Lovely. All right, bog-dogs and the Pike. Anything else?”

She laughed. “You’re always angling for a new spell or ability, Fury. But I like that about you.”

Blushing, I stared at the fork in the road. “Well, at least I’m not over there, trying to make a deal.”

“You couldn’t even if you wanted to. Theosians aren’t allowed to make deals with the Elder gods. You’re bound to obey.” Even though her voice was light, there was a hint of warning there.

But if I was bound to work for the gods, I wanted as many perks as I could get. Which reminded me that I had forgotten to thank her. “I found the cash card. Thank you—it helps a lot. If everything is a go on Monday, I’ll call about that job.”

“Fury, when you’re short on funds, you should ask me. I’m not going to heap riches on you—that’s neither your nature nor mine, but I don’t want you going hungry or worrying about paying your bills. I’ll always engineer a job for you, or if you need food, make certain you have the money to buy it. The gods sometimes forget that mortals—or demi-mortals such as yourself—have needs that can only be met in practical ways.”

Her voice was gentle and I realized that she really did care about me. Unlike some of the gods who made their Theosians suffer, Hecate didn’t use me as joke-bait, for which I was ever grateful.

“I’ll find the entrance to the Tunnels. I can’t promise anything, but I’ll do my best.”