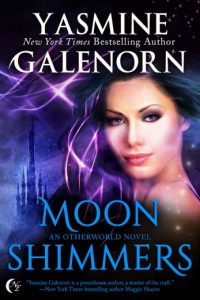 As the magic shot out from me, every which way, there was a sudden burst of light ahead of us. I shielded my eyes from the flash. Great. What the hell had I done now? I cautiously opened my eyes as the flare faded away and squinted, trying to see what was going on.

Annabelle whinnied, shaking her head as if she was just waking up and at that point, I also realized that, except for birdsong and the croaking of frogs, the forest ahead of us was silent. I had muted them, all right. Fade into a general blur. Crap, I had also blurred them too, whatever that meant. I wasn’t sure if the blurriness was an illusion or if I had somehow thrust them into a slightly different reality. As I sat there, cocking my head from one side to another as I puzzled over what had happened, a noise behind me shook me out of my thoughts.

“Camille? Camille?” Smoky was running hard and fast through the trees. He made better time than if he had been on his horse. The hem of his jacket was flying behind him, and I wondered how it managed to avoid being caught on anything. But then again, as one of his dragon attributes, he never got dirty so it made sense that extended to more than cleanliness.

“Are you all right?” He skidded to a halt, his duster settling around his legs as he slowed.

“What?” His words sounded muffled until I realized it was due to my makeshift earplugs. I pulled the tissue out of my ears.

“Oh, yeah. Annabelle just led me on a wild ride.” I pointed ahead. “What do you see?”

He frowned, squinting. “I’m not sure, but it looks like a blurry…Camille, what did you do?”

“How do you know I did anything?” As silly as it sounded, I was suddenly on the defense. My magic backfired so much that my family assumed any mishap could be attributed to a misplaced spell.

“Do I really have to answer that?” He laughed, but then turned back to the still-blurry glade. “What happened?”

I told him about Annabelle sprinting because of the creatures and how we had raced through the woods till the kelpies began luring us in. “So, once she began to calm down, I was able to cast a spell. Which backfired. Maybe. Just a little.”

“You blurred them out? Are they in a different dimension or did you just mangle everybody’s vision?” Smoky headed over to take a look, ducking away from me before I could smack his shoulder for teasing me. As he neared the glade, I realized he was staying perfectly clear against the background.

“Good. I don’t want to be.” He reached out. “Tree trunks are still here. I think you just cast a general obstruction spell.”

It was then that I remembered the creatures who had chased me here in the first place. “Wait—what were those beasts and is everybody okay?”