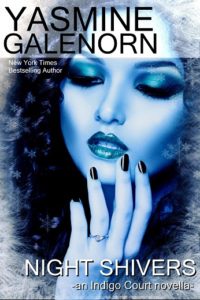 “Word must have traveled through the World Tree that a new Fae Queen has taken over the realm of Snow and Ice. A queen who has not yet come into her full power. As the years go by, your magic will strengthen and others will fear you—they will think twice about attacking the realm. But make no mistake, Your Majesty, the throne is still vulnerable. You are vulnerable.”

Another thought struck me. “If I’m vulnerable to the frost giants, won’t that mean the fire giants might be eyeing Rhiannon as a target? Send word to their shamans at once, Thorn. I want them on alert.”

“As you wish.” He paused. “In the old days, Summer and Winter would never have helped each other. They were at odds.”

“In the not-so-old days, division caused both realms to fall to Myst.”

“I am a new queen—and so is my cousin. The old ways are gone. You know what isolationism did. Myst was able to drive her forces into both Summer and Winter and she almost won. Another enemy could do the same. Fenrick could do the same. I don’t plan on allowing anything of the sort to happen.” I frowned, tapping my fingers on the icy table. “All right, we know who we’re facing. So tell me, how did he get here? And how do we drive him out? And what about the wargs? Can we fight them? Kill them? Or are they as invulnerable as Fenrick?”

“So many questions. One answer at a time. Fenrick is not invulnerable, but he is too powerful for you to fight. Yet. There may come a day when you can take him on.”

“That is easier. He had to have opened a gateway from Jötunheim. Therefore, it should still be open and active. My guess is that he’s scouting before the Jötnar decide to take action.”

“Then we have to find the gateway and push him back through, I guess. What about the vargr? Tell us about them.”  It sounded easier than it was going to be—that much I knew for a fact. But still…at least we weren’t facing Myst again.