NAKED AS A MOON WITCH:

About twenty minutes later, a young guy entered the shop, complete with requisite Birkenstocks and backpack. He headed toward the science fiction section without looking at me. A moment later, apparently unable to find what he wanted, he turned around, about to ask for help. But the words died on his lips as he stood there, staring at me, eyes firmly planted on my boobs.

MEN OF OTHERWORLD: COLLECTION ONE

Shade frowned, but headed into the living room. Delilah was up to something, and it didn’t make him any easier that she obviously didn’t want him to know what. If it had just been girl talk, they would have ignored the fact that he was there and gone on to talk about clothes, makeup, daggers—all their favorite subjects. He was used to being a token girlfriend by default.

Life had been a lot easier before he’d switched sides, at least in some ways. Back then he was a slave and he knew it. He had his place in the world, even if he hadn’t liked it. Now, though, he felt like a man without a country. He was a demon fighting against demons. He was a slave set free in body, but in his mind he still remembered the agonizing days he spent in servitude to Karvanak, the Rāksasa. 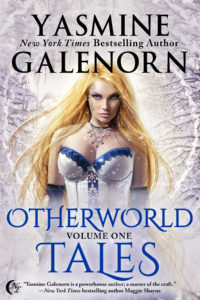