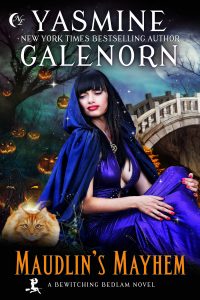 The town was jumping, everybody was geared up for the celebration. The BCU—the Bedlam Credit Union—had cordoned off a section of its parking lot for those of us in the Moonrise Coven, given we were leading the ritual. It was directly across from Turnwheel Park—a large city park that was used for holiday events. During the rest of the year, the city sold licenses to various vendors and events coordinators to hold large scale productions.

During the spring and summer, the farmer’s market ran almost every weekend, and the park was filled with renaissance fairs. In autumn, the Bedlam County Fair held competitions, including a jam & jelly competition, a pickling competition, and the best baker’s competition. Neverfall Academy held its annual spelling bee in the park, along with dances and other events. Thanksgiving saw the community dinner, where all were welcome. The Winter Carnival was a yearly event. And through the year, the Moonrise Coven led rituals for the four of the eight high holidays. We guided the city through the equinoxes and solstices.

I found the rest of the coven, and made sure to put on a good face for them. Tonight was about new beginnings and renewal and a balance of energies between light and dark. I forced myself to focus and leave everything else outside as we discussed the final preparations for the magical ritual we’d be leading.

Sandy and I checked over the altar to make certain everything was there. The ritual sword, with which I would cast the Circle, the chalice and cakes, the incense and the spell components I’d need to conjure up the butterflies for the end of the ritual.

Finally, satisfied that all was in order, I motioned to the coven and we retreated into a small tent to the side. Everyone was there who was supposed to be: Sandy and me, Tristan, Angus, Terrance, and Tanith. Members of the Inner Council, we would lead the ritual. The other members of the coven—sixteen in all—would take their places throughout the crowds, guiding the townsfolk through the ritual.

An auxiliary group—the Moonrise Drummers—a group of witches who found their magic through music—were there to play for us. Thirteen in number, together they possessed an amazing array of talents. They stationed themselves at the four directional markers and as we neared five pm, they began to beat out a tattoo, calling the village to ceremony.

We waited until the precise moment, then I led the other ritualists to the main altar.

The rest of the coven led the townsfolk who had gathered—there must have been a thousand people show up for the ritual—into a series of concentric circles around the main altar. The drummers built the tempo and then, when everyone was in place, I lifted the sword high into the air and the drumbeat fell to a hush.