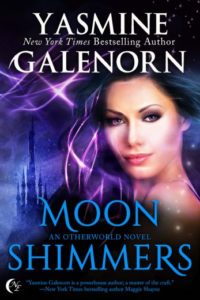 I GRABBED THE reins, trying to calm Annabelle as we careened through the undergrowth, but she was on a one-way mission to put as much distance between us and those creatures as possible. I gave up trying to stop her and instead focused on holding on for dear life. While I had ridden horses in the past, I had never had any inclination to be a show jumper or any such thing.

Shouts from behind told me that a fight had ensued. I prayed that whatever those things were, they wouldn’t manage to damage anybody in the process. As for me, the last thing I was worried about was getting involved with them. Right now, I’d actually welcome it. Annabelle was careening around rocks and jumping over fallen logs, and I just held tight, trying to gather enough energy to project a calming aura, but it was hard to cast a spell when my main focus was on keeping my seat. I had the feeling if I fell off at this speed, I’d break something—quite possibly my neck. In fact, this was how my mother had died. That sobered me even further.

“Hush, hush, it’s okay.” My words were choppy thanks to the bumps and jolts that accompanied me. Ms. Camille’s Wild Ride, I thought. Toad had nuthin’ on me.

Then, the soft cadence of song hit me again. Oh great, we were nearing the ponds and the kelpies were singing. Annabelle responded, beginning to slow. I tried to ignore the summons. As soon as my horse was trotting instead of galloping full speed, I grabbed out a tissue from my pocket and tore it in two, stuffing the halves into my ears for makeshift earplugs. While it didn’t fully mute the singing, it distorted it enough to where I wasn’t totally entranced. I felt the pull, but was able to force my attention away from it.