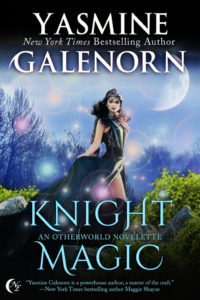 The Barrow was still getting used to us. I wasn’t sure what formalities Morgaine had instituted, but from the way people acted, they had been strict. She always was one for pomp and circumstance, but I was the opposite. It still annoyed me that people fussed over me so much, and that I couldn’t go anywhere without the ever present retinue that seemed to gather behind me. Aeval assured me that I’d get used to it in time but until then, life as a queen wasn’t proving to be all it was cracked up to be.

I skirted around the guards who were at my back and held out my hands. “Thank gods. Get me out of here. I’m going stir crazy.”

“Let’s go walk in the gardens.” He lowered his voice. “There’s news, and I don’t trust any place within these walls to be secure.”

Morio took my hand and, followed by the guards who frantically tried to keep up, we jogged out to my private garden. The garden was one big positive in a world with a lot of negatives. It put my old garden back home to shame. At least, at what had been my home, I thought with a wistful sigh. I had insisted on a private place in which to walk, and less than two weeks after I had taken the throne of Dusk & Twilight, the garden-witches had it ready for me.

One thought on “Excerpt: Knight Magic”