Today’s excerpt comes from Men of Otherworld: Collection One. 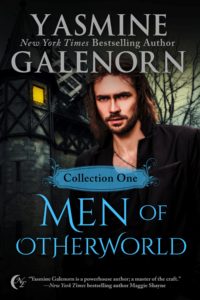 “You bugger, you. Go on with you, get to the herd and fill your belly.” He shooed her off, trying to laugh. Dredge couldn’t be here. Vampires slept during the daylight, even the strongest of them. And Dredge wasn’t the hunter, not this time. No, Dredge wouldn’t know him from a rock. Because Dredge was halfway to insane, and the only thing that mattered to him was the current kill, the current prey. Rozurial had hunted him across the world and back again before giving up to settle in and have as normal of a life as he could. Last he heard, Dredge was tracking through Ceredream, feeding off the whores and the homeless—castaways who wouldn’t be missed. No, it wasn’t Dredge who had set him on alert. Just who it was, he didn’t know. But not Dredge.

“Have a seat. Would you like something to drink? Some wine or coffee or…I don’t know. What do you want?” Sharah paused, blushing but then the words poured out of her mouth like money out of a slot machine. “I just realized, I have no idea what you like to do after work. Other than hang out with Delilah and her family.” She bit her lip, blushing. “I’m sorry—you probably don’t want to talk about her—about them—maybe…” Dropping to the sofa, she let out a sigh. “I blew it, didn’t I? This date was probably a bad idea. I don’t even know what to call you.”

After a moment, Trillian joined him. He’d taken on the mission and been paid, half in advance. And Trillian honored his oaths. The message he carried was dire and had to be delivered, so he might as well get it over with. The papers weighed heavily in his hand, and not just because they were addressed to Sephreh ob Tanu—Camille’s father. No, the information in the message spelled a change for both Otherworld and Earthside. Trillian had been over through the portals a few times, and he knew more than he let on about the world they had left so long ago.

Roman considered her for a moment. She seemed pleasant, almost college-prep. Which brought up the question: What was she doing here? What had brought her into his house, into his stable? He left the choosing of the bloodwhores up to his personal secretary but this meeting—the first—was the final decision. Here, he either put his stamp of approval on the deal, or he dismissed the candidates and they were never allowed to reapply.

But she ignored him, leaping to the thin ledge. There wasn’t room for both her and the basket of pumpkin-shaped gourds, and she managed to catch a garland as she slipped off, which brought down the basket and everything else with it. The mantel was bare, there were decorations everywhere, and Delilah sat on the ground, looking a little dazed, with the garland hanging around her neck.