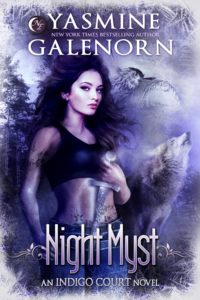 “How did they start? How on earth could the vampires mix with the Fae? Did they turn them like they do humans?” Peyton looked as confused as I felt.

I skimmed through until I came to a passage that seemed to answer her question.

Some thousand years ago, a scouting group from the Vampire Nation led by Geoffrey the Great attempted a raid on the Unseelie Court. They took prisoners—a group of the bewitching dark Fae. Intent upon siring the women as vampires in order to infiltrate the Unseelie, they used the techniques that they’d always used successfully on humans.

What they did not expect was for the women—nearing death and forced to drink of the vampires’ blood—to live and regain their strength at an alarming rate. But the vampire blood had changed their makeup.

First, the vampires quickly discovered their new daughters weren’t bound to them the way humans would be. Second, the Unseelie women could still use most of their magic, as well as having the vampires’ strength. But they’d shifted even further into the shadow realm.

The Vampiric Fae quickly took control of their captors, forcing them to bring in males of their race and turn them. Since the Vampiric Fae are alive, rather than undead, they can still mate. Their offspring keep all characteristics from their parents.

A war broke out within the Unseelie Court, who considered the tainted Fae to be abominations, and the Fallen Fae were cast out, pariah. These nests of living vampires—the Vampiric Fae—were driven off, but only due to their lack of numbers.

Ruthless, far more terrifying than either of their sires, they crossed an ocean and retreated into the dark forests to create their own social structure. The Indigo Court is ruled over by Queen Myst, the Mistress of Mayhem, the original Faerie who was turned by the vampires. She is awesome in her beauty, seducing before she strikes.

Over the years, the Indigo Court faded from view while growing in numbers and strength. The Vampire Nation has sworn they will gain revenge for their defeat and humiliation. A prophecy of theirs, first put forth by Crawl, the Blood Oracle, discusses the breakout of an eventual war between the two races.