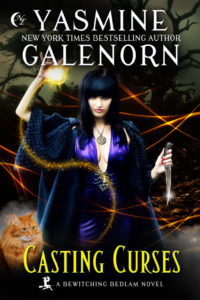 “No shit, Sherlock. I need you to go back to my place and see how Alex is faring. Tell him what happened to the van, and have him drive over here in the sedan. Max and I are going to need a way to get home. Also, have him contact my insurance company and start a claim on the van. Pop back here and let me know when you get in touch with him.” Sandy just shook her head as she stared at the van. “Sometimes Mama Nature can be a bitch.”

Lihi gave her a salute and vanished. More than once, Sandy had encouraged me to forge a contract with a homunculus, but given that I had a cjinn and had recently picked up an owl as a familiar who decided that I was his witch, that would be more responsibility than I could handle.

We turned and walked away from the cars, heading into the back yard. I had three acres of land, part of it forest land. I planned to turn the forest into a camp ground and rent out spaces for people who would rather go glamping than stay in the bed-and-breakfast.

My backyard consisted of an entire lot, with several large oak and maple trees near the house. But the branch that was jutting through my roof seemed to have come from one of the Douglas firs near the driveway. It was massive, but the storm had ripped it off like stripping paper off a signboard. It had punched a hole directly through the roof in what looked to be several places.