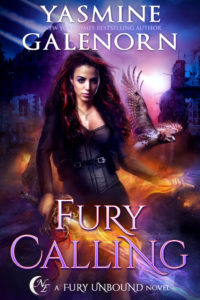 “Tigra!” I let go of Tam’s hand and raced over to the weretiger, grabbing her and hugging her before she could get out a word. “I’m so glad to see you!”

Tigra was a lovely woman, tall and muscular, sturdy as most weretigers were. Her skin was a pale yellow and she had faint black chevrons running up her arms and legs. Her hair was tawny blond, with black highlights. We had last seen each other over six months before. I glanced beyond her to see that her brother, Carson, was following her into camp. He looked winded, whereas Tigra was fresh and peppy.

“You brought your brother—” I paused. “Does that mean that Bend’s gone?” Last we had seen Carson, he had been living in Bend. He was a research scientist for an independent laboratory, and the Corp-Rats had tried to shut them down but never managed.

“No, Bend still stands, but the company he worked for is gone. No more electricity. At least not right now. And anybody even suspected to have worked for the government is being driven out. Carson never worked for the Conglomerate, but people mistakenly thought so.” The look in Tigra’s eyes told me it was worse than just a simple case of mistaken identity, but I didn’t want to press, not where others could hear.

“Come on, let’s get you settled. Have you come to stay, or are you headed elsewhere with Lightning Strikes?” The organization Tigra had worked for was under Gaia’s direct authority and kept a watch out for any resurgence of the Weather Wars.

“That’s another thing, but it needs to wait until we can speak privately.”