So Mercury Retrograde started today, as I mentioned a few days back. And sure enough, like clockwork, I got proof positive that it always bites me in the butt. I’m not even going to hope that today’s fiasco will be the worst of it, because every time I do that, all I seem to do is challenge it. 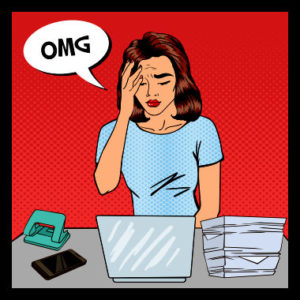 We’ve already been in the shadow of MR. In the past two weeks, we had to replace our washing machine. My niece was in an accident with some idiot crunching her car and giving her a concussion, another friend of mine was in a car accident—luckily he wasn’t hurt, our Samhain celebration fizzled because one of our circle members came down sick, another had her back go out, plus my niece still couldn’t get here. A friend of mine lost her job, and so on and so forth.

So when I got up this morning, I was prepared for the full onslaught. At least I can laugh over today’s mess.

As some of you may have heard me mention, I have been doing an experiment with what’s called clean coffee. I’ve read on several blogs belonging to MCAS patients on how they managed to keep coffee in their diet, because I’ve been missing it horribly, and I haven’t felt like myself without it. The common denominators seem to be finding an organic coffee that has been tested for mold, additives, and pesticides, and drinking it in smaller amounts. So I bought a package of already ground clean coffee, and I’ve been trying it out and—YAY—it doesn’t seem to give me reactions! Of course I can’t drink as much as I use to but even a one-shot latte a day helps me feel like my old self to some degree and that’s a blessing. 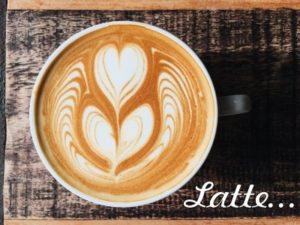 Of course, that meant I had to buy a new espresso machine since I gave Fred away — I named this one Freida — and of course, I had to buy a new bean grinder because I had given mine away. As I said, I had bought a bag of ground coffee, but I prefer grinding it myself and this was ground for coffee, not espresso. I had been using a small grinder to grind the pre-ground coffee finer (the little ones that are good for grinding spices), but to make good espresso you really need a burr grinder.

Well, the new grinder came yesterday but Andria hadn’t set it up when she unpacked it. She won’t be here again until Tuesday, and this morning, I looked around but couldn’t find the instructions on assembling it anywhere. So, I put the machine together the best I could figure out and gave it a try.

First I tried to grind the pre-ground coffee I had to the consistency I wanted. But, the new grinder did not approve and wouldn’t grind it. So I tried to pour the grounds into the smaller grinder I had been using, managing to spill part of it on the floor. I also ended up filling the actual grinder too full, and when I tried to get the lid on, I jammed it on too tight and yes—broke the smaller grinder. 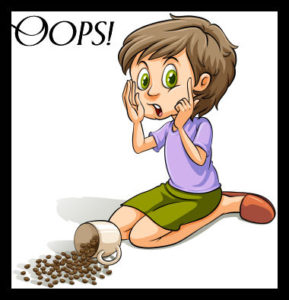 In trying to maneuver everything around on an already crowded countertop, I next managed to tip over the bag of very expensive coffee beans and they spilled all over the floor. By this time I was cursing up a blue streak. Sam came in and told me to sit down and he would clean it up for me. Gotta love my husband, he’s one of the best men out there. (We both count ourselves lucky).

Anyway, Sam cleaned up the mess, I threw away the smaller grinder that I broke, and proceeded to grind what was left of my beans and promptly got sprayed by fine coffee dust. But I ground enough for a couple of days and made my latte.

When I came back to my desk and looked up the grinder online, thinking I was about ready to ship it back and buy a different one, I saw that a metal catch-cup had come with it, along with a lid that keeps the grinds from flying off everywhere. I asked Sam where it was and he said it was in the dishwasher. So I will give the grinder another chance, now that I have a containment system, and I’m sitting here with my one-shot latte, hopefully giving you all a good laugh for the day

So, how’s your first day of November going?

Would You Like Some Coffee With Your Retrograde?
Tagged on: But First Coffee    Daily Life    Got to Laugh or I'll Cry    Mercury Retrograde

8 thoughts on “Would You Like Some Coffee With Your Retrograde?”