Every other Friday I’ll be focusing on a character profile from my books/series. Today, we’re stalking Angel Jackson, Ember’s best friend from the Wild Hunt Series. Angel has a lot of depth, and her backstory hasn’t fully revealed itself to me yet. I’m really looking forward to finding out more about what makes her tick–about what formed her character. 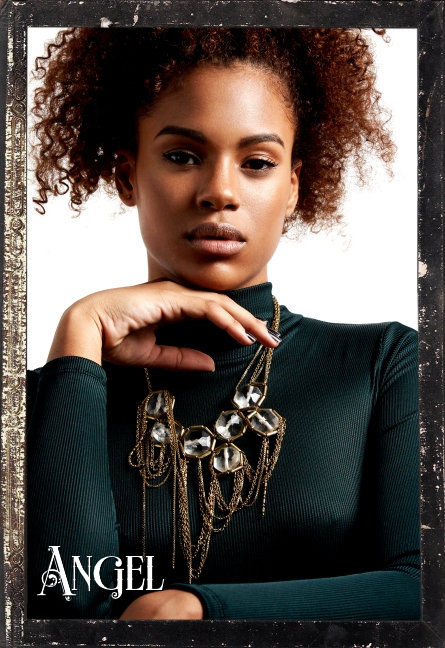 Angel Ceylon Jackson is 30, with curly black shoulder-length hair with red highlights and brown eyes. At 5’10″ she’s lithe, lovely, and could have easily become a model.

Angel is human, although there’s some evidence she may have magical blood in her background. Her birthday is March 12th. Her mother, Mama J., ran a diner and read tarot cards. Angel learned to cook from her mother and helped out on the weekly nights Mama J. opened the diner as a soup kitchen.

She went to college with Ember, but ended up taking an entry level job to help out at home. Her half-brother, DJ’s father is a wolf-shifter who abandoned Mama J. when she told him she was pregnant.

When Mama J. died, Angel took over DJ’s care until she went to work for the Wild Hunt. To keep DJ safe, and to help him grow into his adult self–he needs guidance from other wolf-shifters as he enters puberty–Angel made a huge sacrifice by letting him move in with a foster family.

Angel is an empath, and can tune into people and their energy fairly easily. She’s now learning self-defense given the amount of danger her job with the Wild Hunt puts her in, and she’s currently in a relationship with one of the Dark Fae–Rafe. She has a tattoo of a dagger surrounded by vines on her forearm (from her work with the Wild Hunt Agency). She lives with Ember and is one of the loyalist friends you could ever have.

“Pausing, she trailed her finger along the rim of her teacup. “I have to say yes, Ember. I don’t want to give DJ up, but I can’t put him in danger.” Then the tears began to trickle down her cheeks. “I hate myself for saying this, but I’m almost relieved. I don’t make much money. I’m doing my best to give him the life he deserves, but I don’t think I can help him grow into an adult and learn how to handle his wolf. I have no clue what it means to be a shifter, and most of his own kind won’t give him a second glance. If Herne can find a family to willingly and lovingly take him in, and show him what it means to be Wulfine, then I can’t stand in his way.” –Angel, The Silver Stag

“I guess I’ve needed that for the past couple of days. I’ve been pushing it away and pushing it away, trying to pretend that I was too busy to pay attention. It’s just—her death still feels so close.” She wrapped her arms around her stomach, leaning back against the counter. “In some ways it feels like it’s been a thousand years. It’s been tough, taking care of DJ and trying to figure out what to do. And yet, some days, I think it happened just yesterday.” Angel, Oak & Thorns