Every other Friday I’ll be focusing on a character profile from my books/series. Today, we’re stalking Talia, one of the researchers and agents at the Wild Hunt.

Talia was a harpy when she was born, but at one point when she was younger, her powers were stripped by a liche. She lived near Mount Olympus Park. She was out hunting near an ancient burial ground when she saw something move near one of the gravesites. She went over to find out what it was and it was Lazerous, a liche. He drained her powers. She got free but could barely make it home. Her wings were broken. Her mother healed her up—it took about 100 years—but when it was apparent her powers weren’t going to return, her mother kicked Talia out. 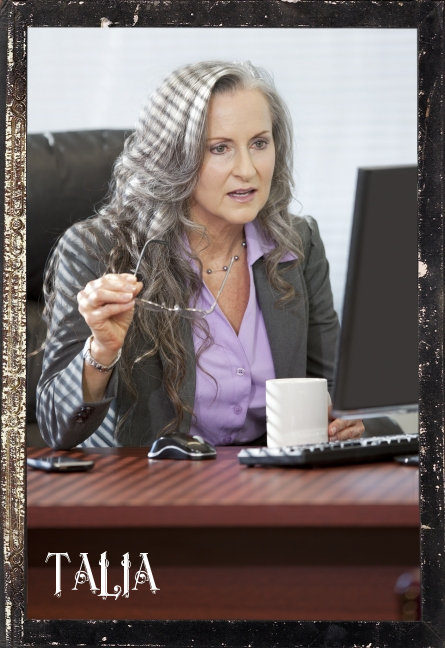 She tried to hunt but couldn’t fly for any long distances, and she didn’t have her screech. She taught herself how to fight  with a sword and use a bow and arrow. She traveled to near the Strait of Dover. She was chasing a doe in the forest when Herne, in his stag form, stopped her. He took her to Morgana, and Morgana offered her a permanent glamour. Talia chose the form of a middle-aged woman in good health. She joined the Wild Hunt. She’s known Herne for hundreds of years.

Talia is around 5’8″, she weighs about 135 lbs, and is trim and athletic. She has a photographic memory and can remember most conversations she’s ever had. She’s also a licensed tattooist, and she has two rescue greyhounds–Roxy and Rena.

She’s had four husbands through the years (all dead, all were human), and she had five stepchildren who are also all dead. She has at least one sister, Varia, who is more of a pain in the ass than anything else.

“What made you choose the form you did?”

“I thought about it a lot. If I chose to look forever young and beautiful, I’d constantly be fending off unwanted advances. I wanted respect. I wanted to blend in without being too homely or too pretty. I decided that an older woman, attractive but not too much so, still active and strong…that felt right. It would give me a lot of freedom in many ways.” Talia shrugged.

“That’s the harpy’s nature. I’ve learned to curb it, but she hasn’t and so far, she hasn’t found a good reason to be patient. As I said, I have to think long and hard before I even consider attempting what she suggested. There’s a lot to lose, as well as a lot to gain.” –Talia