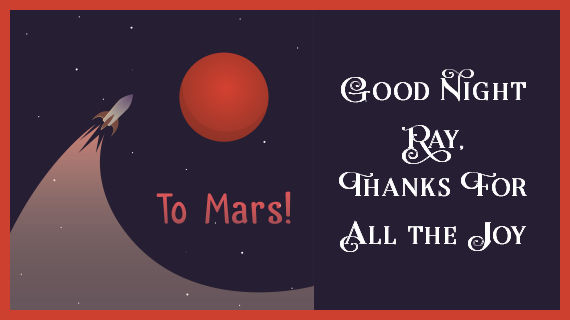 I realized this blog post somehow disappeared when we moved my blog over. Many posts did, actually. But I wanted this post on my blog, because it meant so much to me, and I still feel the same. I wrote it June 6th, 2012, when my favorite author died. So here it is:

The lights have gone out in Green Town, USA. The sands of Mars rest silently. On Venus, the long rains have stopped. And over on the African veldt, the lions are mourning.

I knew, I knew in my heart that the day I heard those words I would sit here, crying, and yes—I am weeping. Because for me—and for the world—one of the most brilliant imaginations to ever live has vanished. I only take comfort that he’s left behind a legacy of words and stories that will forever live on.

You see, Ray Bradbury was instrumental, though he never knew it, in saving my life. I have talked before about what a fucked up childhood I had, and how my writing kept me sane, but what I haven’t said much about are the days I would sit in my room, on the edge of my bed, staring at the razor blade or pill bottle in my hand, thinking it would be so easy to just get it over with and end the constant pain. I had a very broken childhood, and from the time I was thirteen till the time I was fifteen, things were so bad that I hated myself, and I hated being alive. At age fifteen, I started college instead of high school and I knew in two years I could get the fuck out of there—college also helped save my life. So I was able to grit my teeth and get through and get out.

And the other thing that kept me going?

Books. Books and stories and the words within. The magic that the authors made left me breathless, swept me away from the home I hated, the stepfather who hurt me, the feeling that I was trapped. I escaped by reading, and I could envision something beyond my life, something bigger—better—different.

And since I was a fantasy and science fiction fan, I envisioned space travel and alien worlds and landscapes…I envisioned creatures out of legend and lore…and also…a town named Green Town, filled with dark carnivals and dandelion wine and a lake where a girl had drowned, and a world that terrified me—a world where books were burned…

And so I lived for the stories, for the books and worlds that these authors offered out, lifesavers inscribed in paper and ink.

And first and foremost, there was always Ray Bradbury.

I discovered him when I was young, very young. And his work spoke to me—actually it sang to me. I’ve often said that he taught me that prose can sing. Prose can make music…stories become visions become experiences. And for me, Ray’s work epitomized that. He quickly became—and has stayed—my favorite author, all through my life. For the forty-some years I’ve been reading (I learned to read quite young), Ray Bradbury’s work has been there, and the thought that he was still in the world, making magic with words, comforted me.

In the darkest part of my youth, when I would sit there with the razor blade and pills, I would look at my bookcase, and see his work. And I would know that if I went through with it, not only would I never get a chance to escape into those worlds again, but I’d never get a chance to create my own worlds for others to visit. And so, I would put the razor blade down—or the bottle of pills—and I would pick up a book, and lose myself again. Or I would sit down at the desk and write…and lose myself in my writing.  And I would submit my stories, and get rejected (I think I submitted my first short story to a magazine when I was about thirteen). But I kept going because I knew it was a long journey, and that it would be hard.

When I was in my twenties, I wrote him what was my very first fan letter (back in the days when all mail was snail mail). I thanked him, and told him how much his work meant to me and how much of an inspiration he was and how I was trying to get published, and getting rejections—but still trying. Ray Bradbury wrote back and he encouraged me to keep trying. I cherished that letter…and it’s still there, in my files somewhere. Now, I’m glad that I let him know what his work meant to me. What a bright light he brought to my life.

I always dreamed of meeting him—though the past few years, I’ve been worried. He was getting older, and the chances to see him were few. I never realized that dream, and for that I am sad. But I take heart in that he answered a lot of interviews, that he wrote a lot of essays—because through not only the fiction, but the nonfiction, I’ve been able to get a glimpse of the man who played such an influential part in my life—and never even knew it.

Ray Bradbury lived to a grand old age, and he worked to the end…but still…there was such a timelessness about his work, that part of me—a little part—hoped perhaps he’d just live on. Silly? Yes, but then, we all have our hopes and dreams.

If it’s possible to love someone you never met, well, I guess I love Ray Bradbury. I love his work. I love what he offered to the world. I love that he told stories, he didn’t just slap words on a page. I love that he told us what generated those stories—(especially the story of meeting Mr. Electrico at the circus—look it up, it’s a wonderful story).

And I love that he admitted to having a dark side. From “Listen to the Echoes”—interviews he did with Sam Weller:

“Weller: “So what is your dark half?”
“Bradbury: “You’ve seen my books you can tell right there. I’m Jim Nightshade. I’m Mr. Dark.”
“Weller: How so? Everybody knows you as such a positive, loving, encouraging, inspirational figure. What is the darker side to your persona that people don’t know?”
“Bradbury: “It’s all in Dark Carnival, it’s all in Something Wicked. There it is. Completely. I get the dark side out in my stories.”

Ray Bradbury was a writer’s writer. He wrote what I think is perhaps one of the best books on the psychology of writing. “Zen and the Art of Writing.” And I have read that book like a bible.

“Run fast, stand still. This, the lesson from lizards. For all writers. Observe almost any survival creature, you see the same….What can we writers learn from lizards, lift from birds? In quickness is truth. The faster you blurt, the more swiftly you write, the more honest you are.”

I fully believe that. Get it on the page, get it out of you, and then worry about the editing. If you believe in your work, in your story, in your characters, they will come.

I suppose I should wrap this up. My tears are lessened, though my heart is heavy. The cats want fed. Life continues…the only difference between yesterday morning and this morning, is that my favorite writer—and a person I wish I could have known—is dead. The silence is deafening.

It seems fitting that he went out under the Venus transit. I dunno why, but it just seems right. And even that happens rarely—a celestial event. Yes, I think he went riding off with Venus, into the Long Rain…

Mr. Bradbury, you will be sorely missed. The world is a better place for you having been in it.

Good night, Ray…I hope you realized just how much you meant to people.

2 thoughts on “The Lions Are Mourning Tonight”