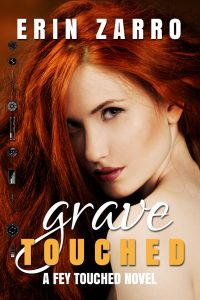 Q: What do you love most about what you write?

EZ: I love combining sci-fi and fantasy, being able to combine the two, the different things I can do. I’m a science buff, and I love playing with magic, so I get the best of both worlds.  🙂

Q: Tell me the name of one of your characters, and what you loved and struggled with most while writing them?

EZ: Brianna is one of my core characters in the Fey Touched series. I struggled with her at first because she was keeping a secret, and I didn’t know what it was. It took me two books to find out. 😉 What I love about her is her unselfishness – she will do anything for the people she loves, even at great personal cost.

Q: What’s the oddest thing you’ve ever received from a fan or bought for your writing?

EZ: I don’t know if this would be considered odd, but while at Frankenmuth (Michigan), I found this figurine of a fairy ballerina. One of my favorite books that I’ve written is centered around, you guessed it, a fairy ballerina.

Q: What do you want your readers to take away from your books?

EZ: I’d like them to see the world through the eyes of my characters, to feel their struggles, their pain, their happiness. I want them to know love and the lengths people go through to have it – and keep it. I use redemption and love conquers all as themes, because I believe in both.

Q: What is the weirdest new thing you’ve done in the past year? Did you enjoy it?

EZ: I’ve been experimenting with digital infrared. That is, a digital camera converted to only “see” the infrared spectrum. It takes the pictures in color, which is cool, but I post-process them in Photoshop to b&w. While in college, I used to shoot b&w infrared film and fell in love. So when I found out I could also do it digitally, I was so excited! So far, the pictures I’ve taken have been gorgeous.

Q: What do you have coming out next, or what just came out?

EZ: My book Grave Touched, book 2 in my Fey Touched series, came out last May.

Q: Will you have espresso, mocha, cappuccino, latte, coffee, tea, or some other concoction?

EZ: Hot chocolate, which I do drink even when it’s hot. I’m crazy.

Erin Zarro is an indie novelist and poet living in Michigan. She’s married to her Prince Charming, and she has a feline child named Hailey who she’s convinced is part vampire. She loves all things scary and spooky, and is on a mission to scare herself, as nothing lately has scared her. She writes in the genres of sci-fi, fantasy, and horror.