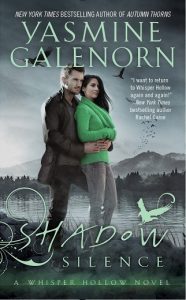 A few weeks till SHADOW SILENCE the second Whisper Hollow book comes out! This will be the last book I will be able to sign over at Seattle Mystery Bookshop, given the shift I’ve taken to indie. Preorder from there before September 27th to ensure a copy, if you want a signed copy of one of my books.

While there were only about 5,000 people in the town, it was compact and the downtown area was definitely centralized. The shops were as colorful as the houses. The Broom & Thistle Coffee Shop was the local coffee hangout. The Herb & Essence apothecary was run by a gothic-looking gentleman I knew only as Prague. The Harlequin Theatre served as both cinema and stage. All were beloved members of the community.

So was the Vintage Bookstore on Cedar Street, owned by Trevor Riversong, a member of one of the Salish tribes. Trevor was also a member of the Crescent Moon Society. He brought his tribal knowledge of the area to bear in our meetings. A block over, and a few blocks further north on Main Street was the Whisper Hollow Town Square, a mini-mall, and the Crescent Moon Spa, a full- service day spa. Other little shops dotted the main drag, boutiques that catered to both specific interests and general browsing.

As I drove through the streets, looking for a parking spot, I spied one next to Beacon Park, on the corner of Third and Main. The park was across the street from a sports field, the community center, and the town pool.

Beacon Park had a gazebo and plenty of benches scattered around, as well as a playground area for children. In the center was a large tiered fountain. For eight months out of the year it ran, but from the beginning of November to the end of February, it sat silent, except for the period starting on the Winter Solstice until New Year’s. Then, it sparkled with colored water spray, providing the temperatures cooperated. Towering firs and maples guarded the park, along with a couple of old oaks, and a giant cedar. Smaller bushes and ferns graced the park floor, but for the most part, the undergrowth was kept in check.

I eased into the spot and turned off the engine. Parking was cheap; I could park all day here for five dollars compared to cities like Seattle. As I fumbled in my purse for quarters to feed the meter, a tapping on my window jolted me out of my thoughts and I found myself staring at a fit, pulled- together- looking woman with skin the color of deep umber. Her short, spiky pompadour was bleached red. What always stood out to me, though, were her eyes. They were luminous, coffee brown like my own.

“Nadia!” I quickly found my quarters and then opened the door, stepping onto the sidewalk.

Nadia Freemont was near my own age, although you could never tell ages in this town, and she owned the Mossy Rock Steakhouse, the most upscale restaurant in Whisper Hollow. She was a genius with food and her meals were rumored to have sparked more than one romance in town.

One thought on “Shadow Silence Excerpt”