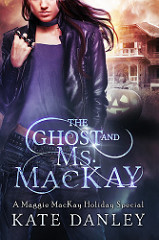 KD: I love my characters.  I know a lot of writers approach their stories from plot or genre angles, but for me, my way in is always the characters.  They appear fully formed, almost outside of me, and my job is just to take dictation.

KD: Shall we go with Maggie MacKay in my Maggie series?  She is a tough as nails broad who is really good at her job as a magical bounty hunter.  One of my frustrations with a lot of heroines I was reading at the time was that they weren’t good at what they did.  They just happened into success.  But not Maggie.  She’s always the solution to the problem.  I love her strength.  I love her attitude.  And I love presenting a heroine who doesn’t need a man to save her.

One of the things I debated long and hard about (and is the source of most of my negative reviews) is my use of “strong language.”  I know it is hard for some people to imagine, but there was a day when the internet was new and blogs were used for more than pitching ads.  Prior to blogs and message boards, everything available for the public to read on a mass scale was pretty much determined by six publishing companies and some newspapers.  And there were RULES.  But when blogging started, language began to shift.  People started making up words.  Sentence structure was thrown out the window.  It was alive and fluid.  And words you weren’t allowed to use were suddenly available.  When I made the decision to independently publish Maggie, I wanted to reflect the freedom we had for the first time in history to say whatever we wanted however we wanted to say it.

KD: One of the most amazing things was when my first book, The Woodcutter, was published by 47North, a group of friends got together and bought me a Sequoia in the redwood forest outside of Santa Cruz through the Save the Redwoods League.  I have a map and plans to hike there to give it a hug.

KD: I hope they leave with a warm fuzzy feeling in their heart.  I hope my books make life just a little easier for folks.

YG: What do you have coming up next? Or what just came out?

KD: I just released a Halloween short in my Maggie MacKay: Magical Tracker series called The Ghost and Ms. MacKay.  I really enjoyed writing a little side adventure for my characters and hope to do more.  Coming next, though, will be book eight in the Maggie series.

YG: Weapons, weapons…what’s your favorite weapon and why?

KD: Is it cheesy to say the human body?  I’m a MASSIVE Jackie Chan fan and am a sucker for a beautifully choreographed fight scene.

YG:  Will you have espresso, mocha, cappuccino, latte, coffee, tea, or some other concoction?

stage and screen with a B.S. in theatre from Towson University.  She began her writing career as an indie author in 2010. Since then, she has sold over half-a- million books; she has been published by 47North; she has been honored with various awards, including the Garcia Award for Best Fiction Book of the Year and McDougall Previews Award for the Best Fantasy Book of the Year; and her Maggie MacKay series has been optioned for film and television development.

Her 1930s screwball comedy Building Madness won the Panowski Playwriting Award and is in development for a West End run.  She has over 300+ film, television, and theatre credits to her name, and specializes in sketch, improv, and Shakespeare. She trained at the Groundlings and was part of the main company at the Acme Comedy Theater in Hollywood.  She learned on-camera puppetry from Mr. Snuffleupagus and played the head of a 20-foot dinosaur on an NBC pilot. She lost on Hollywood Squares.

The Ghost and Ms. MacKay is available on Amazon, Kobo, Nook, iTunes