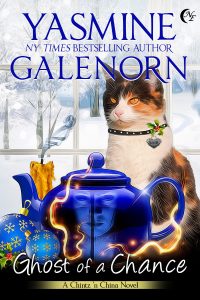 AS SOON AS Andrew left, I pulled out Nanna’s trunk and hauled it into the kitchen. While the water was heating for a pot of tea, I carefully emptied the contents of the trunk onto the table, lifting out Nanna’s journal, piles of charms and incense, and other paraphernalia. Once it was empty, I felt around the edges of the black velvet lining. The smell of old wood, polished with scented oils, made me shiver. Here, in my hands, was living history and tradition, but not one that most people would ever read. This was what lineage was all about.

After hunting for a few minutes, I found the hidden trigger. The velvet-lined bottom gave a little pop and came loose. I lifted out the cushioned insert and set it aside. Nanna had taught me about the false-bottom trick before she died; I was the only one who knew about it, besides the carver of the trunk, who was long dead.

Hidden inside, within the folds of a thick satin wrap, rested a scabbard, worked of leather blackened with age. Every month, under the light of the new moon long after the kids were asleep, I oiled this scabbard, rubbing the amber-scented unguent into the leather. Now I unwound the peace binding that held the blade firmly within the sheath. As the leather thong dropped away, I withdrew a gleaming blade. It, too, received a thorough cleaning each month. I would take a soft cloth and polish the dagger, as Nanna had taught me, as her teacher had taught her.

More than five hundred years old, the dagger was known as a seax. Single-edged, the blade stretched out a good twelve inches from the hilt, which was carved of antler, and the patterned welding had left a brilliant weave of darkened knotwork along the steel. Whether the sheath was the original remained a mystery. I didn’t know and neither had Nanna, but the dagger was old, and she had given it to me on her deathbed.

I grasped the hilt. It felt heavy, slightly awkward in my hand. I seldom used it except when things felt out of control, and then the heft of the blade, the feel of tradition, passed through the steel to calm and give me a boost of courage. Magical blades sliced through energy; they also amplified and directed it. Attuned to their owners through years of use, they were sacred objects of tradition, treated with respect and care.

I set the dagger on the counter and stopped what I was doing long enough to pour the water over the tea bags. While the tea steeped, I replaced the false bottom and shifted everything back into the trunk again. The dagger might help me evict Mr. B & U. Then again, it might not, but either way, it wouldn’t hinder my workings.

After I poured myself a cup of tea, I began a list of everything I could remember about exorcising harmful spirits. There wasn’t much—Nanna had done such a good job of keeping them out in the first place that she hadn’t had much call to evict them. Most of what I knew came from recent texts on the subject.