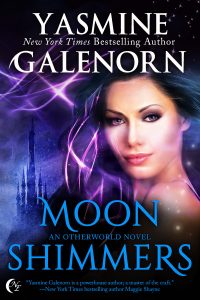 “I thought of that myself,” I said, veering onto a two-lane highway. We were headed into the wilds now. In the short time that Aeval and Titania had established the sovereign nation, it was as though the land had taken new life, with trees and shrubs bursting forth with a massive amount of new growth.

Talamh Lonrach Oll stood at two thousand acres and Aeval had recently put in a bid on another fifteen hundred. The government had ordered a limit of five thousand acres for now, and I had no doubt within a year we’d be at that number. I also had the sneaking suspicion that Aeval and Titania were working magic to push the boundaries on that limit.

As we approached the ten-foot tall silver-plated gates, I could feel the rush of earth energy. The elementals were happy, and the land was thick with life. Cedar and fir abounded, and stands of birch and maple. The Fae had planted an oak grove last year and the trees were springing up so incredibly fast. The ferns were waist high, and huckleberry bushes abounded, along with salmonberry and blackberry brambles and—unfortunately—stinging nettles. Skunk cabbage lined the stream that flowed through the reserve, and hostas and moss covered the ground.

No electricity was allowed within the borders of the gates, but magic was rife and energy itself—thick and available. There were plenty of amenities, but they weren’t powered by the outer world. No outsiders were allowed in without good reason, though occasionally Titania and Aeval would host days when guests could apply to visit, and a limited number of passes were granted.

I slowed as we approached the gates. Guards, ten of them, were watching the gate. The Fae militia was deadly and accurate in their aim. The guards motioned for us to pull in. The road curved toward the left, into a large parking lot. There were a number of cars here, most belonging to the Fae who lived on this land. This was as far as motorized vehicles were allowed to go. From here, it was either hoof it on foot or take a horse and carriage.

Speaking of which, there were two carriages waiting, each drawn by a pair of gorgeous horses. Friesians, the horses were a good sixteen hands high, black as the inky night. They were strong and muscled, with a curling mane that rivaled Fabio’s hair. Feathers flowed off the fetlocks, trimmed neatly so it billowed as they ran but didn’t drag on the ground.

Smoky, Morio, and I took one carriage, while Menolly, Delilah, and Vanzir rode in the other. The lack of noise from the outer world—no electrical wires humming, no cars, no televisions or stereos playing—lulled me, calming my nerves. The sound of birdsong still echoed even though dusk had fallen and twilight was nearing. As I leaned back and closed my eyes, the pinpricks of magic skittered over my skin. This was old, deep magic. Fae magic, that saturated the land and everything on it.

Usually, when we came here, we had to borrow the carriage and drive ourselves, but from now on, that would be different. Ever since the proclamation went out about my impending ascent to the throne, I had always found a driver waiting for me, even on the visits where I hadn’t let them know in advance that I was coming.