The wild roses were blooming in the garden, which meant that before long it would be time to gather the honey and start harvesting apples. Rozurial loved this time of year when everything was still warm and golden with the afternoon sun, but autumn was clearly beckoning from just over the hill. As the sun crept over the horizon, streaking the early dawn with golden tongues of fire, Roz sat on a slope near his home, chewing on a piece of grass, as he contemplated what chores he needed to finish before nightfall.

Chase had always been extremely good about keeping his private affairs separated from work, until now. And at this moment, he was unsure just what the hell he was doing. Should he? Shouldn’t he? He’d vacillated so much on this decision that, even standing on Sharah’s doorstep, he wasn’t sure if he could actually force himself to go through with this. But then again, if he didn’t, if he walked away and stood up the elfin medic, work would be a nightmare of embarrassments. No, he had asked her out on a date and now he was obligated to go through with it. Chase drew a sharp breath, reached out, and rang the bell.

Trillian nodded. “Yeah, but to tell you the truth, I have no clue what I expect.” His gaze rose, following the spires of the ostentatious palace. “I don’t even know if she’s working for the Y’Elestrial Intelligence Agency. I seem to remember her telling me she was being transferred to another department the last time we were…on again. And if she is here, will her father even tell her I want to se her? He sure as hell won’t be happy to see me. The man hates my guts.”

“Dotti Rollins.” She smiled, but behind the smile, her nerves were showing through. She was dressed like Roman preferred his bloodwhores to dress—skirts, sweaters, normal clothes. He never allowed them to appear at his table in anything but a tidy manner. No negligees, no lingerie, no sweats. Sexy clothes were perfectly fine, but he wasn’t running a brothel or a gym. The fact was, he rarely slept with any of the women who lived under his roof, who provided him with their blood.

Shade was looking forward to the weekend far more than he’d looked forward to anything for a long time. The family—including Maggie and Hanna—were packing up for a two-day vacation out at Smoky’s barrow, and he and Delilah would have the whole house to themselves.. Granted, they already had the entire third floor to themselves, but there was always somebody needing something—always some interruption. This weekend would be a wonderful cure to all of that. 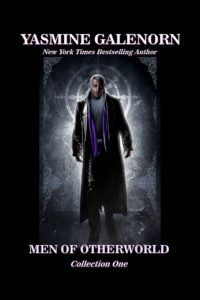