Today’s excerpt comes from A Harvest of Bones.

The night was crisp, but judging from the clouds, the mist would rise before morning. In Chiqetaw, the streetlights were reminiscent of the gas lanterns that adorned street corners years ago before electricity and mercury vapor hit the mainstream. Modern in use, but vintage in looks, they gave the town a homey, cozy feel.

As I neared the lot, the hairs on my arms and the back of my neck began to bristle. Something was out there all right. I turned off my flashlight and slowed. As I rounded the fence that separated my house from Joe’s new land, the clouds parted briefly, letting a bare glimmer of star-shine through. The moon was near dark, of no use in lighting my way.

I squinted, searching the vague shapes and shadows, when a flicker of light caught my attention. Faint—so faint I could barely keep it in sight. One step at a time, I closed in, taking care not to go careening into the basement myself. The lights were a good twenty yards beyond the foundation, still out of reach, hovering in the last tangle of brambles we hadn’t managed to clear yet. As I moved closer, they came into focus. Whoa, Nelly. Kip had nailed it. Dancing lights, all right.

The glowing orbs were about the size of a large grapefruit and they darted through the air, shimmering shades of pink and greens, pale yellow, and blue so bright it was almost white. Enchanted, I watched as they swooped and dove around the lot.

One of the orbs suddenly approached me, hovering at arm’s length. It was almost a perfect sphere, and energy crackled from it. I reached out again, probing for a sense of what it was, but the orb darted away. Then, almost imperceptibly, it began to move forward again until it was hovering right in front of my face. My eyes ached from the light as I held my breath, waiting to see what it would do.

It circled me slowly, radiating behind my head, and then settled back in front of me. As we stood there in a comfortable standoff, I reached out again with my thoughts and asked, “Who are you? What do you want?”

Almost instantaneously, every light in the lot flickered and vanished, and a low wail rose from the basement, chilling me to the core. Holy hell, what was down there? 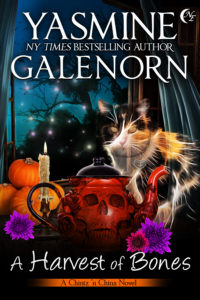 One thought on “Backlist Blitz: A Harvest of Bones”