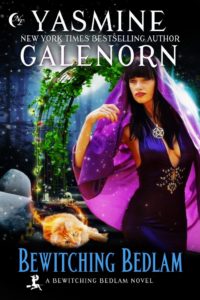 THE POST OFFICE was slammed. By the time we got through the line, Sandy thought of a couple of other errands she needed to run. When we finally pulled into Essie’s driveway, it was already four-thirty. The sun had set and the winter dusk gave the estate a desolate air. It wasn’t the same sense of abandonment that my own home had given off when I first set eyes on it. No, Essie’s house was deliberately set to look foreboding. If I didn’t know that a vampire lived inside, along with her other nest-mates, I would have pegged the place as the haven of an emo-goth family, overdone and melodramatic. But given that the occupants had the bite—literally—to back up the bark, I decided to keep my opinion to myself.

“So, Essie’s lair.” Sandy stared at the house as I cut the motor and leaned back in my seat.

“Yeah. You ever been here?” I felt like a kid in a movie who was about to be dared into throwing stones at the creepy old lady’s house.

“Do you think I’d keep it from you if I had?” She eyed the place, sounding nervous now that we were here. “They say Essie’s freakshow scary.”

“That’s what they used to say about me, doll.” I stared at the house. Making up my mind, I opened my door and stepped out into the drifting snowbanks. Apparently, Essie didn’t believe in shoveling her walkway. Of course, given how many visitors voluntarily showed up here, I doubt if she had to worry about lawsuits.

Sandy reluctantly joined me. The yard was fenced, and a gate opened onto the sidewalk leading up to the house. The whole place had an air of desolation, but I had a suspicion it was contrived and not out of neglect. The trees loomed over the mansion—they needed a good trimming and I suppressed a snort. Essie wouldn’t appreciate the shadows they provided if one of them came down on her roof. By the looks of the branches, none of them had been trimmed in a long time, and it was doubtful she had hired an arborist to check the stability of their roots.

Sandy pushed close to me. “You think she likes being a vampire?”

“I think we can make bank on that.” Skirting the worst of the snow piles on the pathway, we finally reached the porch. The steps were icy and I began to wonder just how much of a test this was. A You really want to visit me? Prove it sort of thing.