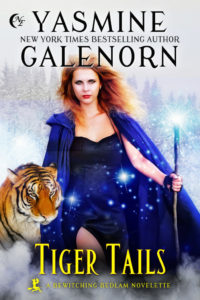 A few seconds later, Lihi appeared, landing on my shoulder. Startled, I jumped.

We had developed a game. The homunculus would do her best to catch me off guard, and I tried to be ready for her. I seldom won, but she found it amusing and I liked making her happy.

Lihi was about twelve inches high, as tall as a Barbie doll, and a real cutie. She had a petite figure, great gauzy bat wings and tufted ears, and a rat-like tail. She wore a bright pink halter and leather shorts, and we had been buddies for four years.

Actually, she was my indentured servant. We had signed a seven-year contract and so far, it had worked out quite well. She was funny, ate like a trucker, and in her world, the crystals I paid her in were as good as gold. In return, Lihi performed all sorts of tasks for me from the mundane to the magical. She was on the spot when I needed her, and did excellent work. Win-win all the way around. But I was careful to never overwork her. A happy homunculus was a helpful one.