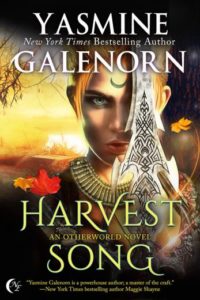 I was sitting on the bed, clipping my toenails, when I felt a shift in the room. I slowly straightened up, glancing around. Shade was out. He was down at Iris’s, helping Bruce to fix up their greenhouse.

I was feeling on edge. There had been too many unwanted surprises lately, so much so that I felt like I was constantly on high alert. Every noise, every nuance had become an instant alarm. Anything that shifted the energy had raised a red flag until we checked it out.

The constant vigilance was tiring, especially since Camille and Menolly had moved out right before the Summer Solstice. Everything about the past few months had felt off kilter, as I learned how to live in a house that had suddenly emptied out. Oh, Shade was still with me, yes, and Rozurial was still living out in the studio. Maggie and Hanna were with us. But the rooms echoed with the absence of life.

Over in the the corner, a figure began to form in a haze of mist. I reached for my dagger, but then relaxed as I recognized the familiar face.

The woman had long hair that waved past her shoulders, the coppery red strands the same color as Menolly’s. On her forehead, she bore the same mark that I did—the silhouette of a black scythe, gleaming like obsidian. Her arms were a vision in vivid black and orange, covered with tattoos of autumn leaves and vines that entwined their way up to her shoulders. Again, they were the same as the tattoos on my arms. The leaves burned with color, vibrant and alive. The woman wore a sheer robe the color of twilight over a long gown, and a wreath of autumn leaves wound around her head.

“Greta, I’m surprised to see you. Is anything wrong?”