Today’s excerpt comes from A Blush with Death . 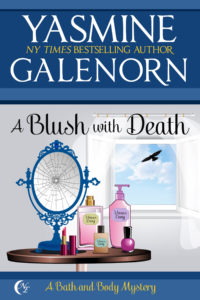 Book Page to find buy links:  A Blush with Death

The conference seemed even more frantic, if that was possible, as I marched down the rows of vendors, pointedly ignoring the Belles, who seemed caught up in some more motivational cheerleading. They were huddled in a circle, chanting away. Maybe they’d morphed into some demon fan club who worshiped Bebe as their fiendish leader, I thought, then shook off the idea when I realized I was half-serious. I steered clear of their booth, taking an alternative route to reach Venus Envy’s stall.

Tawny waved when she saw me, and after a quick hello, I asked, “Did you move my recipe journal? Do you even remember seeing it?”

Her eyes wide, she quickly shook her head. “Nope…I never touch your stuff. I’m too nervous about messing something up. Maybe the cleaning lady?”

I hadn’t realized I was so intimidating. “God, am I that much of an ogre? I called Clarisse a little while ago and she basically said the same thing you just did, in the same tone of voice.” I glanced around. “Then let me ask you this. You remember when Sharon was in the store a few days ago? Did she come back later the same day?”

Tawny thought about it for a moment, then perked up. “Oh, yeah, she said she forgot something over by your station. But I had my hands full, so I told her to go take a look. She must have found it, whatever it was, because when I went over to help her, she was gone.”

I groaned. “Have you seen her today?”

With a pop of her gum, Tawny shook her head. “Not that I remember, but then again, I haven’t really been looking for her.” She brightened. “I’ve passed out most of the samples, though.” The table was nearly empty, and it looked like there’d been a big run on the Lazy Lilac line and the Juniper Girl products.