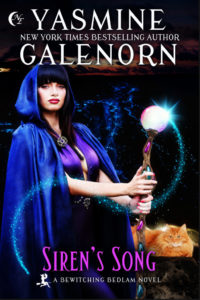 “How was the tour?” I asked, brushing my hair back into a ponytail.

“Shoo fly, I want to talk. We’ll have sex again tomorrow night.” I grinned. “Or maybe later tonight. After the week I’ve had, I’d need to talk about something fun.”

Crossing his arms behind his head as he leaned against the headboard, he said, “Well, for one thing, we met with an indie producer who is interested in signing the band to his label.”

I froze, then slowly sat down the brush. “What? You’re kidding, right? I thought you were going to release it yourself?”

“So did we, but this would make it easier to get airplay. The company is called DreamGen Productions. They’re seriously interested in signing us. One of their reps will be coming up here in a week or so to discuss the possibility.” His eyes were practically glowing. “This could mean a nationwide tour, sweetheart.”

My heart lurched. Just a little. “How…would that work? How long would you be gone?” Then, I caught myself. I wasn’t ready to play the clingy girlfriend. “Never mind. Talk to them first and see what happens. Tell me about the shows.”

Aegis didn’t seem to notice my hesitation, because he plunged right in to telling me how the shows had gone—mostly good—and how the boys in the band were all fired up. The Boys of Bedlam played industrial medieval music. Hard-core darkwave gothic sounds, as well as a number of reworked folk songs. It had been yet one more odd point of synchronicity between Aegis and me—with me being the subject of the folk song and his band named for that song.