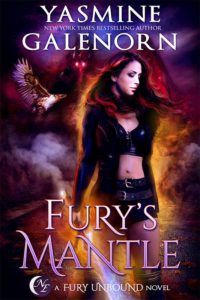 Absently, I nodded, my thoughts still on the approaching storm. Yes, there was something off about it, and if Hecate had taught me one thing, it was to pay attention to my intuition. But, unable to suss out what was amiss, I finally let out a sigh and shook my head.

“Right. Let’s head back, then.” I turned to follow him back to the horses. Captain, my horse, was a Theosian as well. Only he was trapped in his horse form when he was on land. I had met him as Captain Varga, when he had owned a ship. He was bound to Poseidon, as I was to Hecate, and when he was on a boat, he could take human form. But the moment he touched solid ground, he turned into a beautiful white stallion.

After the second World Shift, Varga had opted to live in his horse form rather than risk life on the open ocean with so many unknowns. We had become good friends, and at least once every couple of weeks we ventured out on Reflection Lake on a raft specifically made big enough to hold a horse, where he would shift into human form and we would talk about everything and anything.

I swung my leg over his back, settling into the saddle, and Captain turned to follow Zed as we rode east along the trail to Willow Wood. The trails were navigable, for the most part, and we did our best to keep them that way. But even though we had done our best to clear out the dangerous plants, it was best to stick to the paths when traveling. Wandering Ivy and Honey Sickles grew thick around here. Carnivorous plants were well-adapted to this area, and it was all too easy to wander into a patch, not realizing it until it was too late and you became so much plant food.

One thought on “Excerpt Fury’s Mantle”