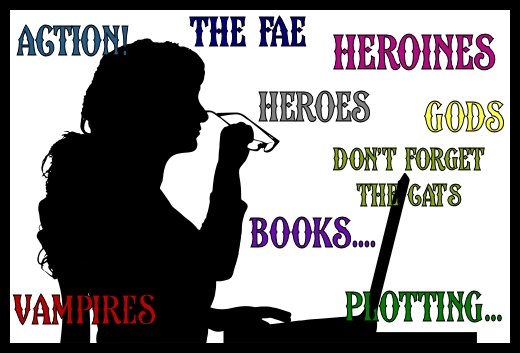 I dreamt about my characters the other night. This doesn’t happen to me often. In fact, it’s only happened to me a few times, with a few series. I dreamed about the Indigo Court series, before I ever wrote it. And even during the writing, I had several interesting vampire dreams that led right back to Lannan. They weren’t exactly the most pleasant dreams — considering that the Lannan character is half off his rocker and definitely out for himself.

I dreamed about the Whisper Hollow series when I was planning it out — before I started writing it. I started dreaming of the characters after that. In fact Dr. Divine was the character I dreamt about most. He felt very very real in my dreams, and I actually connect him with the god Hermes for some reason.

So what makes an author dream about their series? That’s a good question, and one I don’t have the answer for. I think for me, it indicates those series that I felt the most passionate about. Indigo Court was a dark series, but it sucked me in and I felt like I was writing in a dream. Whisper Hollow still haunts me. I wish I could write more in it, but I’m trying to get some of the issues with the UK rights settled. It’s a pain in the ass.

And then, with the Wild Hunt series, the gods involved are near and dear to my heart, in my real life. The characters stand out to me. I’m looking forward to continuing Lyrical’s stories and adventures, and I really do hope to be able to come back to the Hedge Dragon series someday when I get my feelings sorted out. The Wild Hunt world is so vast and there’s so much possibility there. But I need to boost my sales, hence the reason for going into KU with it. If the reads really add up, that means I can write more in it.

I think I dream about the series that resonate most on a spiritual aspect for me, that resonate as being just one step away from reality. And all three of those series did that for me.

So, as a reader, do you dream about characters that you’ve read about? Do they ever stick with you strong enough to influence your dreaming adventures? If so, tell me which characters from which series, and what you got out of those dreams.

3 thoughts on “Dreaming About Characters”