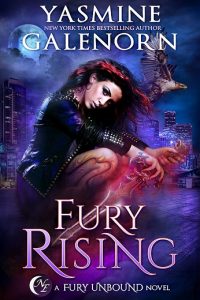 “I don’t want to go in there. But I have no choice.” I had been in the Sandspit a few times, but never very far. Two hundred acres might not seem like much, but when every step was fraught with danger, the prospect of two hundred acres was daunting.

“The World Tree is in there. Think of it, Fury. We have a branch of the World Tree right here. Your ancestors would never have believed it possible. They didn’t even know it existed until Gaia uncloaked it.”

Something about the way he said it made me stop short. “My ancestors? What about yours?” I turned to him. “How old are you, Tam? Jason is two hundred and twenty-four years old, but I have no idea how old you are.”

“Does it matter? Would it change the way you act around me?” He searched my face and I realized he really wanted an answer.

A funny feeling settled in my stomach. I knew very little about Tam, even though I had known him over half my life now. I realized I knew nothing about his family or background—it had never come up in conversation.

“I like to think I wouldn’t react differently. But this isn’t the place for a heart-to-heart conversation, is it? We’d better get moving. Jason, do you have Tommy-Tee? We don’t dare let him wander loose in the Sandspit. It would eat him up.”

With Tommy-Tee in tow, we walked along the fence until we came to one of the openings leading into the magical zone. There were large readerboards warning people of the dangers. As with the Bogs, the boards stated that no rescues would be mounted, no searches made, no recovery efforts undertaken. Enter at your own risk, basically.

I sucked in a deep breath and, because this was my fight no matter what Jason and Tam thought, I was the first to step into the Sandspit.

The shift in energy was immediate. Once through the gate, the winds picked up to a steady, brusque clip. The air shifted, taking on a cool, harsh feel, and stinging grains of sand began to pelt my face. The winds never died in the Sandspit. They never fell silent, but ceaselessly howled, their voices clear with warning.

Here, the elements were alive in a way they weren’t out in the rest of the world. They had sentience—and emotion. And tonight, the winds were angry. I could feel the energy surround me, sweeping up my own emotion and heightening it. Something had happened, and the spirits were pissed. Was it the earthquake? Or something different? That, I couldn’t tell, but I stopped, wanting to hear what the winds were whispering.

“Can you feel it? The winds are trying to tell me something.”

“I can hear it, but I can’t make out what they’re saying.” Tam turned, his back to me. “I’ll watch behind us and to the right. Jason, you watch to our front and left. Fury, do what you need to.”

“Go ahead, Kae. Whatever you need.”

I stepped between them so that I was protected and raised my hands. I couldn’t go into the Crossroads here, there was no intersection, but I could work with my own magic. Fire and flame wouldn’t do much and there wasn’t much to exorcise, but my powers of divination would help.

FURY RISING is available in both E-format and print. You will not be able to buy this in stores, you will have to order it online. It will not be available on Google-Play. I sure hope you enjoy it! If you do, consider dropping a review, please. They matter for indie authors/books. First chapter is up on the FURY RISING page if you want to see the world I’ve started!