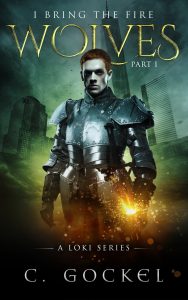 CG: I’ve learned to make maladaptive daydreaming work for me!

CG: I’m a really small fish and I haven’t really gotten any strange gifts from fans. I have gotten some lovely books and emails, though. Emails are a gift. When you’re a writer you’re never sure if you are just indulging in some narcissistic navel gazing. When someone writes you and tells you that your writing has helped them mentally escape from illness, personal tragedy, or just a really long plane flight it means the world.

I haven’t had to buy anything really strange either. My internet search history is another matter …

CG: In I Bring the Fire, my Norse-mythic-urban-fantasy series, the hardest character to write is Odin. Loki is my hero, and Odin is the antagonist, but Odin is more moral than Loki. Odin is so much better than what was before him, but so terrible by our modern values and incapable, or unwilling, to change. He wants to be good; and fails so horribly.

Odin is not my most difficult character to write, though. That distinction goes to Professor James Sinclair in the Archangel Project, my sci-fi series. He thinks he is one thing, but is something else. Since half of the series is from his point of view I had to make him convincingly “other” and yet not turn audiences off. It was a tightrope walk from the get-go, but peeling back the layers has been fun, and allowed me to explore what it means to be human and alive.

CG: I want them to have fun and to feel.

YG: Who is your favorite movie heroine and why?

YG: There’s a disaster threatening the world and you are the only one who can stop it! What’s the disaster and what are your special powers?

CG: My only special power is that motion detectors fail to notice me. It takes forever for the water in the restrooms to come on for me at Target, and I have had to jump up and down in front of the building to get the doors to open. I don’t know if that’s a super power, though. More a super unpower. Although, I suppose, if a James Bondish villain was going to destroy the world I might be able to sneak up to his base undetected.

… But then when I got to the door it wouldn’t slide open.

The world is doomed.

YG: Will you have espresso, mocha, cappuccino, latte, coffee, tea, or some other concoction?

CG: Before the James Bondish super-villain destroys the world, I’d like a cup of tea with milk, please.

You can sample Ms. Gockel’s work for free!
I BRING THE FIRE Part 1 is available free at:

Ms. Gockel has been writing stories for her friends and family since the dark ages (i.e., before word processors existed.) A few years ago, she started posting those stories to the intertubes. She received emails, messages, and reviews from her fans telling her she should ‘do this professionally.’ She didn’t; because she is a coward and life as a digital designer, copywriter and coder is more dependable. But in the end, her husband’s nagging wore her down: “You could be the next ’50 Shades of Gray’ and I could retire!” Unfortunately, the author writes science fiction and fantasy, and isn’t particularly good at writing erotica. She is sad about this; she’d love for her husband to be able to retire and just work for her so she could nag him. At the moment, Ms. Gockel is finishing up the Archangel Project, but she looks forward to returning to the I Bring the Fire Universe someday soon. Ms. Gockel loves to hear from readers. She can be reached by email at: cgockel.publishing AT gmail DOT com

3 thoughts on “Espresso With C. Gockel”