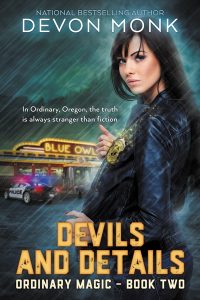 DM: I love exploring magic, the people who have it, have lost it, are looking for it, or are fighting against it. I love writing about love, the romantic kind and all the other kinds that we discover with family, friends, chosen brotherhoods and sisterhoods. I love writing about laughter and darkness and the tiny slivers of hope that strike bright cracks across the nightmare skies and change the world. I love writing about life and the things that make us human, connected, whole.

DM: I guess I’ll talk a little about Death. Thanatos is the newest god to set down his power so he can vacation as a mortal in Ordinary Oregon. From the get-go, I knew he would be both chilling and powerful, but also secretly curious and delighted with every minor detail of living a mortal life for the first time in his existance. There’s a sense of deep humor in his cold, stern heart and a fondness for the lead character Delaney. His style of high-handed affection toward her, almost as if he thinks of her as a daughter but doesn’t want to admit it, was fun to explore.

DM: Everything I’ve bought or received has been awesome! So…how about this? I visited the tourist attractions between Lincoln City and Newport, Oregon to do research for Ordinary Oregon since Ordinary Oregon is a mishmash of those coastal towns.

I particularly loved Ripley’s Believe it or Not where I posed with Satchquatch, got my head stuck in a jar on a shelf, and walked through a portal to an alternate universe where coffee cures the common cold and tea gives you superpowers. Believe it! (or not)

DM: First and foremost: happiness. After that? That strength is found in the character of who we are, how we love, and how we rise to the challenges of the world around us. Also, I personally include extra magic in every book and it totally rubs off on your hands and eyeballs and makes the day brighter, so: fair warning.

YG: What do you have coming up next? Or what just came out?

DM:  My most recent novel is DEVILS AND DETAILS, book #2 of the Ordinary Magic series. Book #3, GODS AND ENDS, will be out Spring of 2017.

YG: You can have any fantastical creature as a familiar/companion pet. What do you choose? Why? And what would you name it?

DM: A fire lizard from Anne McCaffrey’s Dragonriders of Pern series because I have wanted one since I was twelve. I think I would name it Glissando the Great. Or Fred. Probably Fred.

YG: Will you have espresso, mocha, cappuccino, latte, coffee, tea, or some other concoction?

Devon Monk is a national best selling writer of urban fantasy. Her series include Ordinary Magic, House Immortal, Allie Beckstrom, Broken Magic, and Shame and Terric. She also writes the Age of Steam steampunk series, and the occasional short story which can be found in her collection: A Cup of Normal, and in various anthologies. She has one husband, two sons, and lives in Oregon. When not writing, Devon is either drinking too much coffee or knitting silly things.

Caught between the devil and the deep blue sea…

Police Chief Delaney Reed is good at keeping secrets for the beach town of Ordinary Oregon–just ask the vacationing gods or supernatural creatures who live there.

But with the first annual Cake and Skate fundraiser coming up, the only secret Delaney really wants to know is how to stop the unseasonable rain storms. When all the god powers are stolen, a vampire is murdered, and her childhood crush turns out to be keeping deadly secrets of his own, rainy days are the least of her worries.

Hunting a murderer, outsmarting a know-it-all god, and uncovering an ancient vampire’s terrifying past isn’t how she planned to spend her summer. But then again, neither is falling back in love with the one man she should never trust.

One thought on “Espresso With Devon Monk”