Today: ONE HEX OF A WEDDING  (Book #5 of the Chintz ‘n China Series) 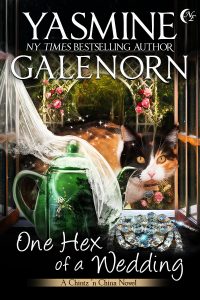 I nodded. “My ex, Roy, showed up and I’m afraid there’s going to be a testosterone match before long.”

She patted me on the hand. “Don’t worry. I’ll gather them up and scoot them home. Do you want them to stay at my place?” Ida, a retired schoolteacher who put the proper in prim and proper, had been the kids’ babysitter since I first moved to Chiqetaw. Along with Horvald, she was my closest neighbor. And though Randa no longer needed a lot of supervision, Kip was still a handful.

I shook my head. “We won’t be too late, so they can go right home if they want. I’d just feel better with you on call.”

As we stepped back into the banquet room, the sheer weight of everybody’s emotions, both good and bad, hit me. I felt like bagging it, taking the kids home myself, and curling up on the sofa with a bad movie and a bowl of popcorn. Ida must have picked up on my sudden depression, because within five minutes the kids were not only ready, but willing to go with her. I didn’t know how she worked her miracles, but I wasn’t going to question them.

“Did you say good-bye to your father?” I asked.

“Yeah, he said he’ll call us in the morning, but he wouldn’t tell us when. He just said to stick around home until he does.”

That was par for the course. Just like Roy to avoid calling, then show up unannounced and expect us to wrap our schedules around him like he was some sort of god.

“We’ll talk about it in the morning,” I said, then hugged both of them. “Go on now. Joe and I’ll be home soon.” As Ida and Horvald—our other neighbor, who was courting Ida in every proper sense of the word—headed out with the kids, I breathed a sigh of relief. At least now when the fireworks flew, the kids would be out of the way. And I had an awful feeling we’d soon be witnessing a brilliant show.

I turned to find my sister, Rose, waiting patiently. Rose was short like me, but fashionably thin and she had a pinched look to her mouth that made her look older than me even though she was a year or so younger.

“Emmy, I know that it’s been a long evening, but I wanted to give you this. It’s a sister-present.” She held out a box.

I hesitated, then accepted the narrow velvet box. Rose and I might be the same height and have the same eyes, but there all resemblances ceased, personality included. She was the good girl, I was the wild child—at least according to Grandma M. Rose was generous, but every gift she gave came with strings attached. I glanced at her and she beamed. Maybe, I thought, maybe she really meant it this time. A sister-present.