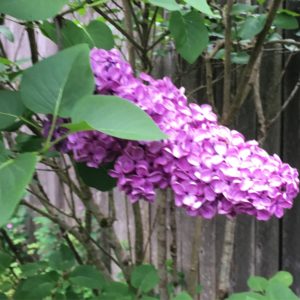 For me, summer is usually frustrating. It’s usually spent fretting, waiting for publishers to get their asses in gear (they practically shut down during summer and it’s really hard to get them to move with any speed on anything), and I usually spend most of the days in my office (not unusual) due to deadlines (writers do not shut down during summer).

But this is an odd summer for me.

For one thing, we had a real winter—cold, even somewhat snowy, and a lot of rain during the October-April rainy season. In fact, we broke the record on rain. Now the pollen’s high, the lawn’s lovely, and we’re getting sun but not too much sun. Right now, summer’s a good thing (with the exception of the allergy season).

But…a lot of people aren’t going to want to hear it, but I’m already feeling autumn in the air. Not late September, bring on the leaf-fall season, but the energy that I usually don’t feel until early-mid August—that tang that hits the air some mornings, that tells you yeah, Autumn may not be here yet, but it’s coming.

I’m into an autumn cleaning binge already. I have the urge to go through all the cupboards, to clear out the outdated, broken, no longer needed clutter (well, it’s not so much clutter at my place—I’m not into clutter at all—but there will always be the ragtag ends), and get everything ready for the harvest season. I’m thinking ahead to stews and soups, to making a few gluten free pies and scones…things like that.

And I’m taking myself in hand, assessing what needs work, and what’s working. The histamine intolerance has brought me face-to-face with just how much stress plays into my body. The reactions worsen with stress, and the past year has been a nightmare of Benadryl and worrying about whether I’ll need my Epi-pen. I’ve been determining what hits me hardest, stress-wise, and making adjustments.

I’ve backed off Twitter except for an occasional comment and for sending my blog links and Instagram links through there. I get too angry and stressed on Twitter. Too much overload.  And I’m enjoying my time more without it. I’ve let Jenn do her job on FB instead of diving in and being there too much. And that helps. I’ve been sitting with my thoughts more, making choices based on what will be best for me—not what others want me to do. I’m being self-focused. I don’t call it selfish or self-centered, because NOT compromising my health for others is self-care, whether it means missing an event a friend is throwing, or just withdrawing and letting my assistants do what they’re paid to do.

As my career begins to blossom in the indie world, and I make choices on what to write based on my economic and creative needs, I’m finding more passion and joy in my work again. And my readers have been noticing the difference in the work—I’ve gotten a number of notes from people saying how much they’re enjoying the new freedom they sense in my writing. And I’m making my own deadlines, and not waiting for someone across the country to approve something I want to do, or to—as most often happens—say “Nope, we don’t want that, think of something else.”

So summer this year is a time of clearing for me. Whether it’s from sitting outside with Samwise in the evening, just listening to the birds and the movement of the world, or diving into Maddy’s Bewitching Bedlam world and dreaming up new stories and ideas, or hanging out with my BFF and reading tarot and playing with magick, I’m finding an inner peace that I haven’t felt for a long time.

That’s my world at this point. So, what is this summer bringing you?