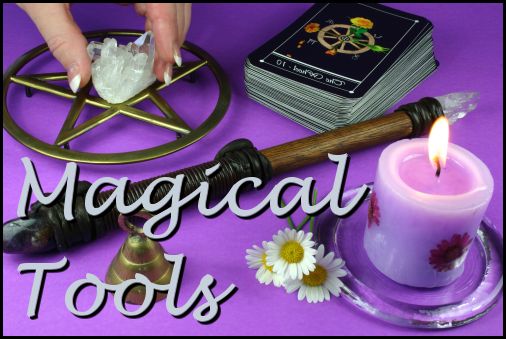 Some Common Magickal Tools And Their Uses

Below, you will find a list of some of the most common, along with brief descriptions of their use.

Athame: A ritual dagger, traditionally double-edged, used  to direct energy.  It can have any hilt you want and it represents both the God’s phallus and the element of Air. In traditional Wicca, a bolline is a white handled knife used for cutting, while the athame is ‘supposed’ to be black-handled and should never be used to cut anything. If you are not in a traditional Wiccan coven, these rules do not apply. (pronounced a-theh-may)

Besom/Broom: Usually with natural bristles and a natural wood handle.  Used to sweep away stagnant energy and negative vibrations.

Candles: All colors; tapers and votives and other unusual shapes; used in candle magick and for altar decoration.

Cauldron: An iron or brass vessel used, primarily, as a symbol.  Of all magickal systems, it is my belief that use of the cauldron is most common among those practicing Celtic Magick.

Censer: Incense burners; can be made of anything from wood to brass and iron.  Should be heat-proof.  Used to hold burning incense.

Chalice: Ritual goblet, made of glass, wood, ceramic, or metal.  Represents the element of Water and the Womb of the Goddess

Crown: A circlet or headdress worn by a Priestess or Priest.  This can be made from metal, wood, or anything else that can be molded to the shape of your head. Some Priestesses like to wear the Triple Goddess symbol (the moon with two crescents attached).

Crystals: Used for invoking power, depending on what type of crystal involved; used in scrying.

Hammer: Used primarily by Norse Pagans; sacred to Thor, the Norse God of Thunder and Agriculture.

Incense: Invokes the element of Air; used for smudging and invoking various energies depending on what type of incense is used.

Oils: Essential oils and blends are charged with magickal energy and used to invoke various powers, depending on which energy the herb possesses.

Pentacle: The altar pentacle represents the element of Earth.  The pentacle necklace or earrings are worn by Witches, Pagans and Wiccans to symbolize their religion.  Represents the five elements (Earth, Air, Fire, Water and Spirit), the human body (the head, two outstretched arms and two outstretched legs) and is a symbol of protection. A pentagram is the five-pointed star but with no circle surrounding it.

Robes: Many Witches like to have special clothing, often referred to as ‘robes’ or regalia, for their rituals.  It can help alter mood.  Whatever you choose to wear for ritual (if anything), it should be easy to move around in, comfortable, and the sleeves shouldn’t fall into the candle flames.

Statues: Statues of deities are placed on the altar to represent the Gods.

Water: Full Moon and New Moon waters are used for various spells; other herbal waters may be also used for spellcraft.

There are so many other things I have used in ritual and magick over the years that it would be impossible to name them all.

3 thoughts on “Magickal Tools–Part One”