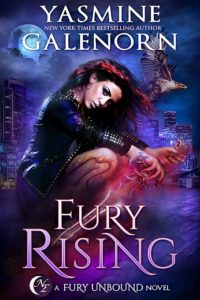 Jason had scheduled two readings for me, which would help out. Besides running the Crossroads Cleaning Company—a psychic cleaning company that I ran out of Jason’s shop—I also read the cards and threw bones.

The readings were simple. The first—a woman who wanted to know where her sister had disappeared to—was hardest.

“I don’t know where Delia went. She’s never been gone this long before, and I know she hasn’t got a boyfriend or anything like that.” Marie couldn’t have been over twenty-two, and she was wide-eyed and worried.

I hated this kind of reading the most and it always broke my heart a little. I bit my lip, barely looking at the cards, because I was too busy watching Marie’s sister. Delia was standing behind Marie’s shoulder, clear as life to me, but she wouldn’t be coming home. Her throat had been slashed—I could see the blood oozing down her neck—and she smiled sadly at me.

Using whisper-speak, I asked the dead girl, “Where’s your body? Your sister needs to know.”

“Up on the Tremble. I took a joy ride with a guy I just met.” She paused, then added, “Tell Marie I’m happy, will you? Tell her that I’m okay, and that I’ll watch over her? And tell her that the man who murdered me is named Donal Tripoli. He lives in Uptown.”

I nodded softly. That wasn’t going to be easy. Uptown was where the upper crust lived—that and North Shore. Croix was more middle-class, or what there was left of it. But in Uptown, people had money to buy off the Corp-Rats. Though the Devani, at least, were less likely to take a bribe. They were ruthless in their pursuit of justice, but that meant the government’s idea of justice, and the government was ruled by money.