Today we’re going to talk about divination. The definition of divination can include everything from understanding the forces going on behind a situation to actually predicting the future. And there are numerous systems for practicing divination.

When I first started out reading tarot cards in 1981, I wasn’t sure how they worked, or whether they even worked. My ex had bought a deck of cards — I’m not sure why because he wasn’t really interested in anything like that — and he gave them to me because he had no clue of what to do with them. I started looking through them, and reading the booklet that came with the deck, and realize that I was deeply fascinated. It didn’t take long before I was working with spreads and layouts, and reading the cards. And I realized then that I had a natural talent with the cards. 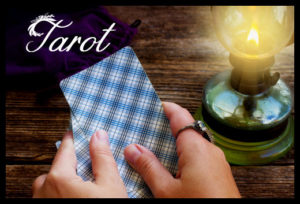 Now, I’ve always been psychic. When I was a little girl, I knew what people were thinking at times, I could always pick the right card out of the deck we were playing ESP card games, and I could even “push” my mother to pick a card other than the one she was looking for.

I also had premonitions and flashes of precognition. I remember one night I was sitting there watching TV, I was about 13 at the time, and I suddenly felt like I was in a different house. I saw two men coming to the door, forcing their way in at gunpoint, tying everyone up, robbing the place, and then leaving. The next day I was listening to the news when they reported that what I had seen had happened somewhere in the Midwest, right about the time I was seeing it the night before. Now, back then, home invasions weren’t common—or they weren’t reported very often. The whole event had gone down just like I had seen. They had knocked on the door, the father opened it, and two men pushed their way, guns drawn, and tied the mother, father, and son up. They robbed the place and ran. I remember staring at the TV, and so was my mother because the night before, I had told her what I had seen. (Remember, this was in the days long before the Internet).

So when I found that the cards responded well to me, and I responded well to the cards, I began teaching myself how to use them. I didn’t buy any books about the tarot, I just did what felt natural. I slept with the cards in my bed, under my pillow. I studied the imagery and what it suggested to me. I learned the definitions and meanings of the cards. And most of all, I listened to the cards when I laid them out.

Until about 1987, I read privately, just for myself and friends. Then, a friend’s mother asked me to do a reading for her. When I finished, she stared at me like I had grown another head. Apparently, my reading was so accurate as to what was happening in her life that she could barely believe it. I didn’t ask her for money, but she pulled out her checkbook and wrote me a check. When I tried to tell her no, she said, “It takes energy and talent to do what you did. Take the check.”

After that I began to read for the public. And eventually, when I moved into my converted school bus, my tarot readings kept food on the table for the cats and me. I read for the public for years after that, and was extremely accurate and had quite a client list. Finally, when we moved from Olympia up to Bellevue, and Sam got a job where we could pay all the bills with his paycheck, I stopped reading for the public. It was exhausting in many ways, and I was burned out on dealing with other people and their problems. Plus, as I sold more books to New York and my fiction career went into high gear, I didn’t have time. 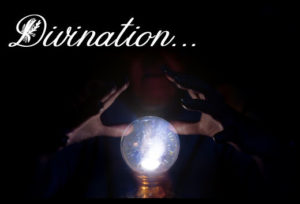 During that time I also branched out into psychic readings — learning to trust my instincts without the cards, but I’ve always loved working with the cards the most. And I still do. I do work with crystals, and my crystal balls, and just psychic readings on the fly, but the cards will always hold my heart. I also work with runes, and have developed my own Faerie Rune system. But I think the cards will always hold the top spot in my divinatory work.

So what is divination? As I said before, it is the ability to use the psychic sense — whether spurred on with a physical system like the cards or crystal ball, or by just letting psychic sense take over — in order to divine the nature of a situation or the probable future.

One thing that I always caution people is this: Nothing’s set in stone. The future is always mutable. There will always be a chance to change the path you’re on, even if only slightly.

Reading the cards, psychic readings, and looking at the runes can offer us a guide map as how to best navigate the negative aspects of life and to accentuate the positive.

If you’re interested in divination, there are several forms that you can explore. Tarot cards are one of the most common. There are hundreds, possibly thousands, of decks. And I own at least fifty of them. I buy a lot of decks for their artwork that I may never use, but I also have at least fifteen decks that I do alternate out in my use. Oracle decks are also a good form for divination, though they are slightly different than a tarot deck. A tarot deck will have standard cards, with generally similar meanings. Oracle decks can run along themes, like animal decks, or they can run along certain systems — for example, there’s probably a reiki deck out there.

There are also runes — the Norse runes, the Celtic Ogham, and a few other lesser-known systems. You can make your own if you like, like I did with my Faerie runes. 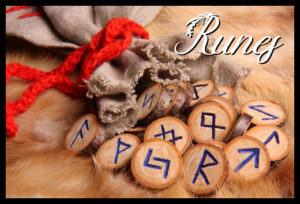 You can focus your energy through crystals. I don’t think anybody knows for sure how this works, but the nature of the crystal will affect how it channels your energy. This is why I personally advocate for clear quartz when doing psychic readings. When I say “clear quartz” I don’t mean it has to be crystal clear without flaws—just that I prefer ‘clear quartz’ for divination as opposed to say—amethyst or lapis or some other stone.

If the spike or sphere has fractures or prisms inside, that won’t really make a difference. In fact, I prefer crystal balls with multiple fractures and prisms inside the sphere. Just hold the crystal, focus your mind, ask a question, and open your inner ear to listen for the answer. This is perhaps a simplistic way of approaching divination, but it’s amazing what your subconscious can tell you can pick up.

In certain spiritual systems, people have used everything from animal entrails to bones to tea leaves to divine information. The only way I would ever even suggest the former (animal entrails), is if you humanely kill a chicken for food, and want to use the innards for magical practices. As far as bones, they can be powerful tools and I use them in my magic — elk and deer bones, cow bones, and other sourced-for-food animals. I also use a lot of elk antlers and deer antlers in my magic, given I’m a priestess to basically a Hunter god and goddess. I’ve made runes on antlers before.

It is my belief that you can make a divination system out of just about anything, providing you assign each part of it a specific meaning, and you focus on the question when you pull whatever it is out of the bag. I could see someone taking monopoly pieces, or other game pieces, and doing this. Because when it comes down to it, while the divinatory system has an energy of its own, you are using it as a conduit to ask for information from the universe.

In some of my upcoming videos I will be talking about some of my favorite decks, and examining them for you. So you might want to subscribe to my YouTube channel, or check here on the blog every Tuesday when I post my video for the week.

So, have you ever used tarot cards or another form of divination? And what are your favorite decks, if you do use tarot or Oracle cards? I’d like to know!

6 thoughts on “How To Choose A System For Divination”