Today’s excerpt comes from A Shadow of Crows. 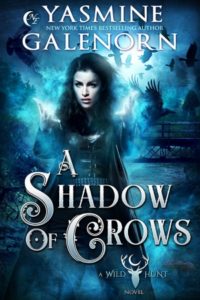 Book Page for Buy links: A Shadow of Crows

“Do you see the car following us? Whoever it is, they were parked a few spots over at the mall. I noticed because the car has a dent in its front bumper that looks pretty bad.”

I glanced up at the mirror. Sure enough, there was a car keeping pace with us. It was a red Camaro, and there was one person in it, but I couldn’t make out whether it was a man or a woman. “Maybe they’re just going in the same direction.”

We were coming up on Pizza-Paparazzi, our favorite pizza joint.

“We’ll find out if they’re following us or not.” I flicked on the turn signal. Then, checking to make sure the way was clear, I made a left turn into the mini-mall and parked in front of the pizza place. I waited for a moment. The red Camaro turned into the lot and parked at another store. I frowned.

“I’ll go get the pizzas and then, I might just head over in their direction. Watch to see if the driver goes into that dry cleaning shop. If so, it’s probably just coincidence.” I unbuckled my seat belt and headed into the store. After I picked up two ready-to-bake pizzas—one with pepperoni and extra cheese, the other a Hawaiian pizza, I wandered back to the car and set them in the backseat next to our packages.

“Did the driver get out of the car?”

“No, whoever it is is still sitting there.” Angel shook her head. “I have an uncomfortable feeling that this isn’t going to be good.”

“Be careful,” she asked.

Nodding, I shut the door and then, nonchalantly turned and headed down the narrow strip of sidewalk in front of the strip mall of stores. As I approached the red car, I realized that the driver looked all too familiar.

One thought on “Excerpt: A Shadow of Crows”