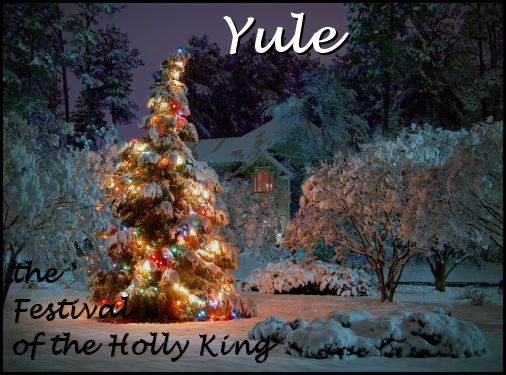 Yule is the celebration of Midwinter.  The Winter Solstice is the longest night of the year when the Oak King reclaims his throne, freeing the world from the chilling grip of winter.  Winter solstice is an astronomical event so the actual date can vary from year-to-year, but the holiday usually falls on December 21st or 22nd.  Check your almanac and account for differences in time zones.  It may fall on December 21st on the west coast, but December 22nd on the east coast.

In the magickal tradition my family and coven follows, the Holly King, who rules over the waning half of the year from mid-summer to mid-winter, meets his brother the Oak King in battle once again, as they do on the summer solstice. Only on Yule, the Holly King falls beneath the blade of the Oak King, as the Oak rises up triumphant and so the cycle continues and the days grow longer under the waxing rule of the Oak Lord.

The Nature of Yule
Tagged on: Holidays    Magick    Paganism    Sabbats    Wheel of the Year    Winter    Witchcraft

5 thoughts on “The Nature of Yule”