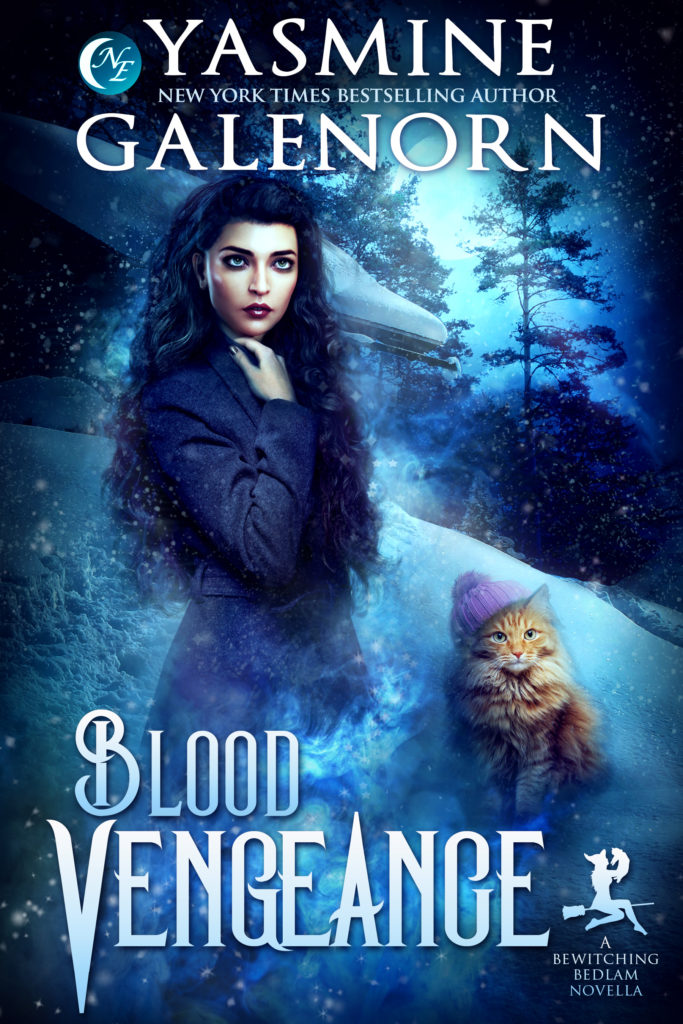 IT SEEMED LIKE a good idea in theory. Just Aegis, Bubba, and me, tucked away in an alpine chalet high in the Cascades, along with the rest of his band. We were enjoying the post New Year winter and winding down from a very busy holiday season, which included a murder case which had me as the main target, and the opening of the Bewitching Bedlam B&B. We needed the break, given all the mayhem we had been through. So here we were, at the bottom of a very snowy mountain, curled in front of the gas fireplace in our room.

The Boys of Bedlam, Aegis's band, were scheduled to play three nights out of the four we were here, but only for an hour each time. Thanks to the gig, our rooms were comped and so was the food. Of course, come sunrise Aegis had to hide out in the spare coffin down in the basement so all my snow-covered walks during the day were spent with the band members. So the trip wasn't quite as romantic as I could hope for, but sunshine had a way of playing havoc with vampires. As in burn to a crisp kind of havoc.

Bubba stretched out on the bed, arching his back to show the long swell of fur on his belly. The cjinn had insisted on coming along when he found out we were going to be gone for a long weekend, and given Bubba's nature-he was all cat, part djinn-I didn't feel like arguing with him. Bubba had been with me for over three hundred years. We had come to rely on one another, and even though we didn't speak the same language, we understood each other perfectly. Bubba was as much a part of my life as Sandy was, and as much as the little bugger could be a butthead, he was also a blessing.

"We're all here except Franny," Aegis said. "I have to say, it's kind of nice to have a vacation from her."

I laughed, then immediately felt guilty. "She can't help her complaining. She's a very unhappy ghost. She didn't ask to be trapped in the house and I still haven't figured out how to help free her." I leaned back, closing my eyes as my head sank into the pillow. I had changed into a loose flannel nightgown and was wearing fuzzy slippers. This weekend was all about comfort.

"You look delicious," Aegis said, and I opened my eyes to find him straddling my lap, his knees on either side of my hips. His eyes flashed, and the tips of his fangs showed from below the curve of his smile. "I could eat you up," he whispered, leaning down to kiss me.

His lips were cold against mine, but they set me off in ways that had become so very welcome over the past couple of months. He gently nipped my bottom lip as he brought his hands up to cup my breasts. As he fingered my nipples through the soft knit of my sweater, I caught my breath, shifting beneath his weight. I wanted nothing more than to strip him naked and slide on top of him, to ride him hard and fast. Yee haw, I thought. The wild witch of the west ropes herself a cowvamp...except my 'cowboy' was a rock star, and I might own a few blades, but nowhere in my closet did I have a pair of spurs.

We were about to move things to the bed, which of course meant chasing Bubba off, when a knock at the door interrupted our sex play. With a grunt, Aegis pushed himself off my lap and, giving me a playful wag of the finger, headed toward the door.

"Keep my place warm," he teased me. "I'm done with the gig tonight so I'm all yours, all night long."

As he crossed the room, I licked my lips. Aegis was delicious, all right. He was tall and muscular, and his jet hair fell to his shoulder blades. His eyes were coffee brown-rich Kona coffee, so deep they might as well be quicksand. Ringed with crimson, they reflected his moods unerringly. He was wearing a pair of black jeans, but had ditched his shirt and shoes. The only other thing he was wearing was the square gold ring with a sun in the center, and a carnelian cabochon in the center of that.

Aegis peeked through the peephole.

"Message from the front desk for you, Sir."

The bellhop handed him an envelope and Aegis fumbled in his pocket for a tip. "Maddy, do you have any change?"

Sighing-I didn't want to get up from the comfy cushion of my seat-I opened my purse and handed him three dollars. I wasn't sure what the going rate for tipping a messenger was, but given he was a bellhop, that should be okay.

The bellhop stared at my chest as I handed him the money, stammering out Thank you before stumbling back out the door.

Aegis laughed as he closed the door. "Leave it to your boobs," he said, ripping open the letter. "Even behind that flannel nightgown, they're monumental." As he scanned the paper, his expression grew somber.

He shook his head, turning on the overhead light. "I don't know, not for sure." He handed me the note. "What do you make out of this?"

I glanced at the handwriting. It wasn't familiar. The letter read, "I need to talk to you privately. Can you meet me behind the gift shop?"

"Who sent you this? Do you recognize the writing?" It seemed troublesome-but then again, it could be some groupie from the dinner show, looking to get some action.

"No, I don't. I have no idea who sent it." Aegis shook his head. "And why meet whoever it is all the way over at the gift shop? That's not even in the hotel. Why not just come to our room?"

"I think...I better find out what this is about." He shrugged on a hoodie and zipped it up in lieu of a shirt. "I'll be back in a few." With a grin, he added, "Don't start without me. Or if you do, don't finish without me."