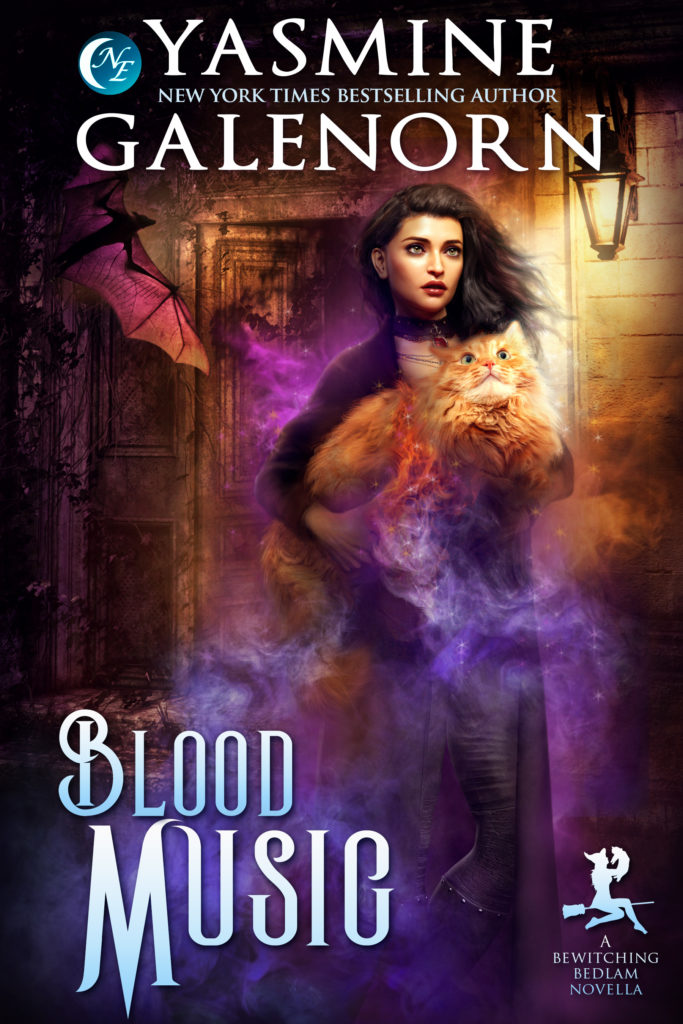 USA Today Bestseller! #33 on Charts in the Taming the Vampire Anthology

Prequel-novelette to the Bewitching Bedlam Series. Available by itself!

When fun-loving witch Maddy Gallowglass moves to Bedlam to restore an old mansion and turn it into a magical bed-and-breakfast, the last thing she expects is to meet her match in the gorgeous vampire Aegis, a former servant of Apollo.

I WAS ATTRACTED to the old mansion before I ever set foot in it. One night, exhausted and tired of pretending to be happy any longer, I decided to get the hell out of Dodge. Or rather, Seattle.

The condo wasn't my home anymore, at least not in my heart, and I was getting really tired of the noise and the rules. I wanted to have my cat with me without hiding him. I wanted to paint my front door red to feng shui prosperity into my life. And I wanted to carve a pumpkin, enchant it, and set it outside my door to delight the trick-or-treaters on Samhain Eve-or as the humans called it, Halloween. But all of those things were prohibited by my HOA. I felt like I was being regulated to death and I was ready to bust heads over it.

In addition, my ex still had a nasty habit of coming around to try to spy on me. He couldn't give up that nasty control streak and I was ready to bust his head, too. It was only through great restraint that I hadn't cast a hex on him. A few focused words and a flick of my hand and I knew I could get him fired. Or better yet, wither up his dick. Preferably while it was inside one of his many girlfriends he had cheated on me with.

"What the hell should I do? I can sell this place, but I haven't the faintest idea of where I want to go. I feel at all sorts of loose ends right now." I glanced over at Sandy, my partner in crime. Or at least, magic and partying. We were coven-mates, and right now we were brewing up our fourth batch of margaritas. Maybe it wasn't a good idea to debate serious questions when we were half-drunk, but then again, I've never actually been accused of being wise.

Smart? Sure. Wise? Not so much.

"Maudlin, you're just smart enough to get yourself in trouble, and not wise enough to see why you shouldn't," my mother always told me. I would have taken offense but from the get-go, I knew she was right.

Sandy snorted. "Why don't you rub Bubba's belly and make a wish?"

I paused in my margarita-making venture. "You really think that's a good idea?"

"I know, but hey...you're drunk. I'm drunk. Bubba loves you too much to take advantage of you in this state."

What Sandy said made a certain amount of sense, at least through my alcohol-washed brain. Bubba was my friend. Next to Sandy, he was my best buddy. He loved me and I loved him. She was right-he wouldn't take advantage of me, not when I was three sheets to the wind.

"Why not give it a try?" I leaned over the cat, who had already flopped on his back, exposing his massive fluffball of a stomach. "Oh, Bubba. Be sweet to me." I tickled his belly. "Help me shake off the dust I've acc...acc..." I paused, trying to remember the word. Finally I finished with, "I've managed to drown in over the years. I need to feel like myself again. Give me adventure. Romance. Something...different."

Bubba let out a purp and a spark raced over my fingertips as I rubbed his fur. I closed my eyes, laughing as the sparkles tickled my skin. But they abruptly stopped and-apparently bored-Bubba raced off into the other room.

I went back to making drinks. "I think he took pity on me and ignored my request."

"You're better off. Dunno why you thought that was a good idea. I'd never ask him for anything." Sandy was glued to the computer screen.

"And you listened to me? I'm drunk. Never listen to a drunken witch. Hey-what about this?"

Sandy forced herself to sit up straight. She was slumped over her laptop, staring at the screen. We had been watching videos of a group of half-naked dancers-Australian men hot enough to burn tongues if we'd been close enough to give them a lick. But now, she had apparently navigated away to what looked like a click-bait site. Seattle's scariest houses or something of that sort.

"What about what, and do you want another drink?"

"That's a stupid question, and what about this?" She tapped on the screen. I leaned forward and found myself looking at a picture of a decaying mansion instead of a pair of oil-slathered abs and thighs.

"Why am I staring at a decrepit old house?"

"Because it's in Bedlam. We could be neighbors! I pass this house every day, but I didn't know it was up for sale."

Bedlam was a small island out in the San Juan Islands, near Lopez and Orcas, located in Haro Strait, on the United States side rather than the Canadian side. Bedlam was also the home to all the local elite of the PretCom-the preternatural community. Sandy had been trying to get me to move there for months, ever since I had broken up with Craig, but I had resisted. It wasn't that I didn't like the idea. I just felt there was something missing from my life...from me. My spirit of adventure had vanished during the years I had spent with my emotionally abusive ex-husband.

I frowned, leaning forward to take a closer look. "Reminds me of the house on The Munsters."

"The mansion is for sale. It's a far cry from this sterile condo with the tight-ass rules you're always bitching about. Why are you staying here? Your life with Craig is done-you don't even like the friends you made together. Add to which, they're all his friends. He got you fired from your job. There's nothing tying you to the city."

She hiccupped and I handed her another margarita.

"Think about it. You like to work with your hands. This is a steal-real estate prices are insane, but you could buy this easily if you sell the condo. There would be plenty left over to fix it up. The house was gorgeous once. It would give you something to do, and when you finish, you'll have a palace fit for our coven. And best yet, you'll be near your best friend."

I stared at the picture. There was something appealing about the house. It looked...lonely. Like it needed love. And I could think of one other added bonus.

"If Craig finds out I sold this place and and plunged the proceeds into a house like that, it would gnaw a hole in his chicken-liver gut. He'd be furious."

The thought of driving him into a fury appealed to me. He had emotionally beaten me down for years. For some reason, I had taken it, at least until the last day, when he pushed me one step too far and I broke out of my apathy. I had burned a hole right through his precious briefcase, melting the leather with one very-pissed-off wave of my finger. That it had been in front of his cock had been a plus. Scared him so much he ran out and hired a lawyer that day.

"He'd be so pissed, and too terrified to say a word." Sandy was egging me on for all she was worth. I'd had to stop her from throwing a whammy on Craig when she found out what he had done to me.

"You know, that alone might be worth it." As I stared at the picture, I realized Sandy made several good points. Through the tequila-colored glasses I was wearing, I could see totally decking the place out. I could create a beautiful, Victorian home that would be perfect for parties with the best of Bedlam.

Giggling, I said, "Craig would shit a brick, wouldn't he? It would be better than any hex I could throw on him. Especially since there's nothing I can ever do to get the past eight years of my life back." A sudden wave of sadness swept over me. "How did I lose myself? How did I go from Maddy, the Mad Wonder, to a woman who knuckled under every time he let out a dissatisfied grunt?"

I tilted my head, staring at the photo. For a fraction of a second, I thought I saw something move in one of the windows, but that had to be the tequila talking.

Sandy nodded, her smile gone. "He would, indeed, and so would all his upper-crust lawyer friends. Craig doesn't deserve the energy it would take to cast a hex on him. He's pigeon food. But honey, this would be as good for you as it would be devastating to him. Living well is the best revenge, remember."

With my mind's eye suddenly filled with visions of Craig throwing a temper tantrum and being unable to do one damned thing about it, I slapped the table. "By gods, I'm going to do it. I'm going to buy myself a mansion!" Before I could change my mind, I reached for the phone and called Bjorn, a fox-shifter who was both a real estate agent and another member of our coven.