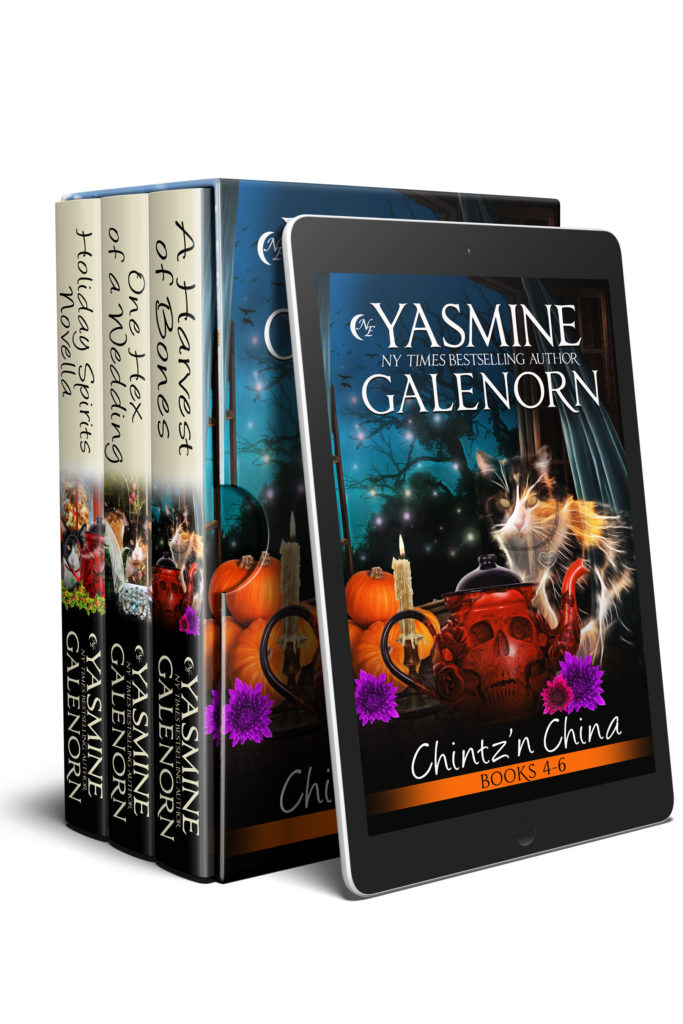 For the first time, here are the last three books in the Chintz 'n China paranormal cozy mystery series, collected together into one volume.

Book Four — A Harvest of Bones:

It's harvest time in Chiqetaw, Washington; Emerald O'Brien's favorite season. But this year, nature yields a most supernatural bounty. When Em and her sweetie, Joe, stumble over a bramble-covered foundation that has remained hidden for fifty years in the lot next door, strange events begin to occur. The cat vanishes. Will o' the Wisps threaten to harm Emerald and her loved ones. And the ghost of a woman named Brigit and her beloved calico make themselves at home in the backyard. Now it's up to Em and her friends to delve into the past, reveal the secrets of the dead and lay them to rest as they ring in the autumn with a harvest of bones.

Book Five — One Hex of a Wedding:

Emerald O'Brien is about to tie the knot with her fiance Joe, but one uninvited guest to their engagement party reminds her that some ties still need to be severed. Her ex-hubby Roy can't hold his liquor--or his temper--and after brawling with Joe, he threatens to ruin their wedding. When Joe is wounded from a gunshot the next day, Roy becomes the prime suspect. Emerald knows her ex has a mean streak a mile wide but doesn't believe he'd be capable of attempted murder. And when a sinister presence starts stalking her maid of honor, Em begins to worry that her marriage has been cursed before she's even walked down the aisle...

When Kip gets himself in serious trouble, a strange spirit enters the house—one that at first poses as Santa Claus. But beneath that jolly exterior, lies a dark creature from legend and lore. Join Emerald O’Brien for the holidays, as she battles both psychic turbulence as well as the demons every mother faces when her child lands in trouble with the law.

Additional books continuing the series that are not included in this set:

Chintz ‘n China Books, 4-6: A Harvest of Bones, One Hex of a Wedding, Holiday Spirits