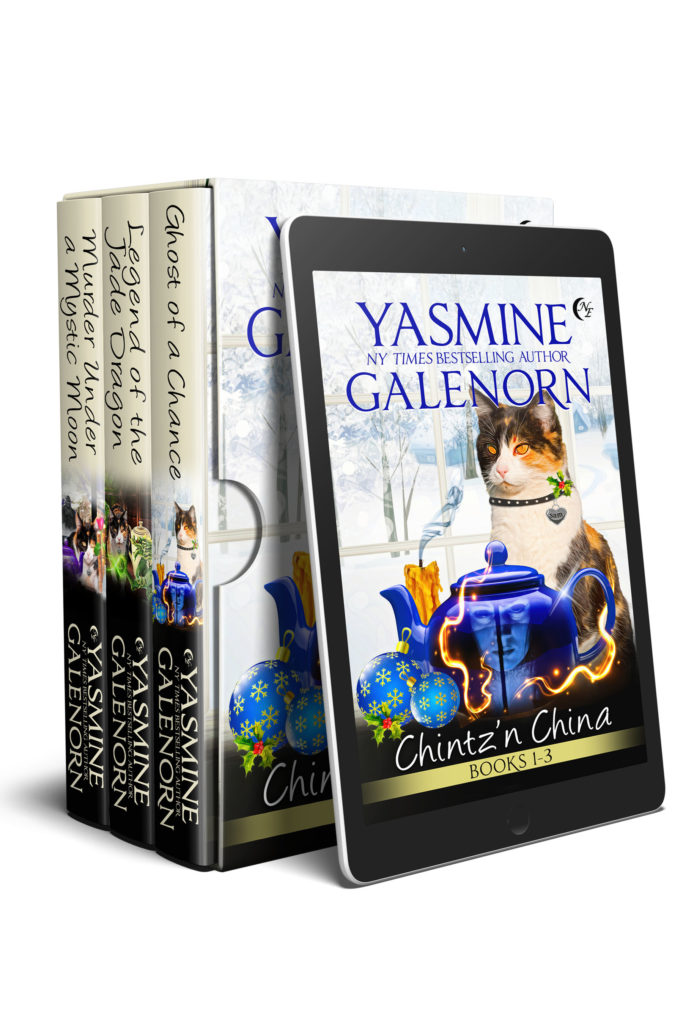 For the first time, here are the first three books in the Chintz 'n China paranormal cozy mystery series, collected together into one volume.

Book One — Ghost of a Chance:

Emerald O'Brien is the owner of the Chintz 'n China Tea Room where guests are served the perfect blend of teas and tarot readings. She never set out to be a detective, but once word gets out that she can communicate with the dead, there's no turning back... When the ghost of Susan Mitchell asks for Emerald's help in convicting her own murderer, Emerald can't refuse. Along with her friends-an ex-supermodel and a cop-and her new love interest, Emerald must search for clues to put the killer behind bars, and Susan's tortured soul to rest.

Tarot cards seldom lie. So when they predict chaos and bad luck for her last client of the day, Emerald gets more than a little worried. He leaves behind a charming jade statue of a dragon--but promptly dies in a hit-and-run accident outside of her shop. When other terrible things begin to plague Em and her family, the only explanation is the jade dragon. To thwart its evil spell, she'll have to follow a trail of heartache all the way back to China's Ming Dynasty--and its ancient--and sometimes harsh--mysteries.

With her teenaged daughter's birthday on the horizon and the town's autumn festival in full swing, Emerald has her hands full with party preparations and teashop specials. But a request from her friend Jimbo has her using her abilities to look into the disappearance of his friend. In the woods surrounding the Klickavail Valley enclave, Emerald senses a strange energy manifesting itself-before literally stumbling across the body of Jimbo's friend. While the police are willing to blame the death on a cougar attack, Emerald knows there's something else wandering the forest-something that resembles the Klakatat monster of legend, but may actually be a monster of a more human kind.

Additional books continuing the series that are not included in this set:

Chintz ‘n China Books, 1 – 3: Ghost of a Chance, Legend of the Jade Dragon, Murder Under A Mystic Moon